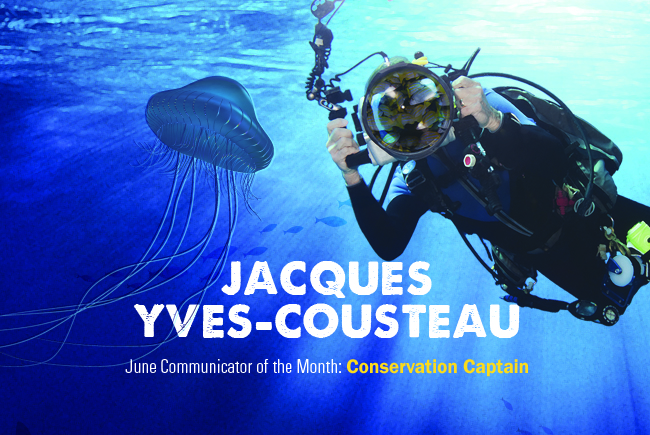 “The sea, the great unifier, is man’s only hope. Now, as never before, the old phrase has a literal meaning: we are all in the same boat.” — Jacques-Yves Cousteau

Born June 11, 1910, Academy Award-winning filmmaker Jacques-Yves Cousteau is considered the most influential environmental filmmaker of all time. His work is credited with launching the modern environmental movement.

Cousteau believed that informed citizens make the best choices to maintain a healthy environment, and he helped increase this knowledge through more than 110 environmental films and 50 books. In 1956, he produced the first color film of the underwater environment in “The Silent World” with Louis Malle.

In the 1970s, Cousteau brought the undersea into American living rooms in the television series “The Underwater Odyssey of Commander Cousteau.” Throughout the show’s 9-year run, his ship, a former Royal Navy minesweeper built by the United States named Calypso, served as a secondary character and became a household name. Through documenting Calypso’s adventures, Cousteau called attention to the environmental dangers of human ignorance and negligence.

Despite his numerous films, television shows, achievements and accolades, Cousteau recognized that more was necessary to protect the planet. In 1973, he founded the Cousteau Society, which “continues the unique explorations and observations of ecosystems throughout the world that have helped millions of people understand and appreciate the fragility of life on our Water Planet.”