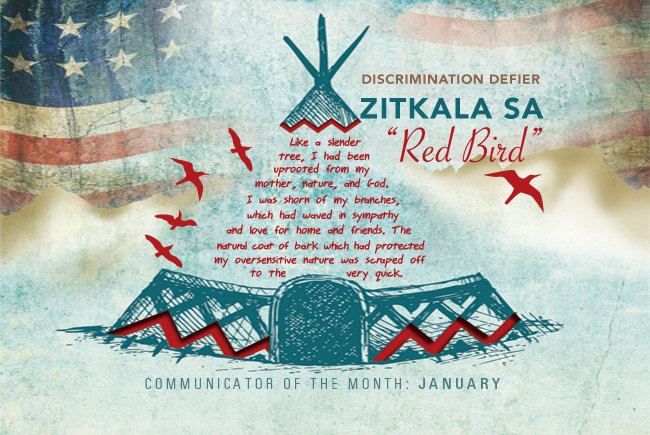 “There is no great; there is no small; in the mind that causeth all.” — Zitkala-Sa “Red Bird”

Born in 1876 to a South Dakota Sioux mother and white father, Gertrude Simmons Bonnin, who adopted the pen name Zitkala-Sa (Red Bird), lived during a time of extreme prejudice and discrimination against Native Americans. Though she was raised in South Dakota’s Yankton Sioux Reservation, Zitkala-Sa lived in diverse parts of the U.S., including Indiana, New England, Utah and eventually Washington, D.C., where she served as secretary of the Society of American Indians.

Through her poetry and prose, which contain a range of Sioux traditions, exhortations and autobiographical information, Zitkala-Sa challenged commonly held beliefs that white culture was superior. She also addressed the rights of Native American women and the bravery of Native American soldiers during World War I. Outside of writing, Zitkala-Sa had a love for music and co-wrote an opera in 1913 called “Sun Dance Opera,” which is likely the first opera ever written by a Native American. Often writing in English to be accessible to a white audience, Zitkala-Sa balanced sharp criticism of dominant stereotypes with support of peaceful coexistence between both cultures. She wrote about punishments for speaking in native languages, as well as the need for Native Americans to learn English. She also played a critical role in ensuring that Native Americans could participate in the dominant culture by advocating for citizenship rights for Native Americans, including the right to vote.

Zitkala-Sa died in 1938 and is buried in Arlington National Cemetery because of her husband’s position as an army captain. Her tombstone reads “Zitkala-Sa of the Sioux Nation.”