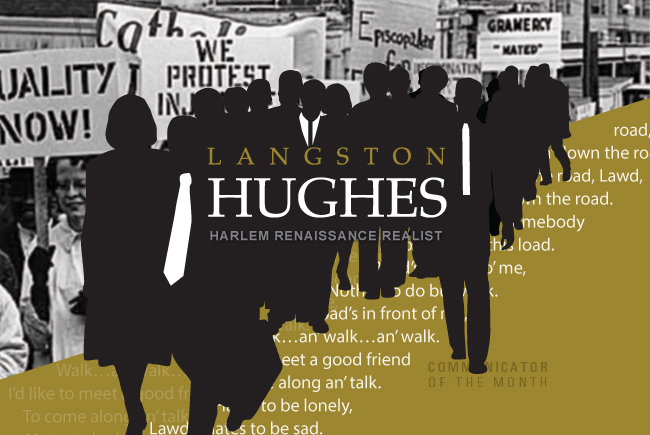 “I learned very early in life that our race problem is not really of black against white, and white against black. It’s a problem of people who are not very knowledgeable, or have small minds, or small spirits.” — Langston Hughes

James Langston Hughes was one of the most influential black poets of his time and a literary champion of racial equality. Born in Joplin, Mo., in 1902, his talents were recognized as early as grammar school, when he was elected class poet.

As he approached adulthood, his social consciousness related to race became clear. This made him highly influential during the Harlem Renaissance. He and contemporaries Zora Neale Hurston, Wallace Thurman, Claude McKay, Countee Cullen, Richard Bruce Nugent and Aaron Douglas were out of step with the black middle class of his time for their beliefs. He criticized other artists, such as W. E. B. Du Bois, as being too accepting of European-based values and culture, and rejected the divisions within the black community itself based on skin color.

Hughes also developed ties to the communist party and even visited the Soviet Union. In 1953, these ties came under intense scrutiny when he was called before Joseph McCarthy’s Senate Permanent Subcommittee on Investigations. After this appearance, he distanced himself from communism, and eventually, from some of his most radical poems.

Hughes died in 1967. His ashes are located beneath the floor medallion in the Arthur Schomburg Center for Research in Black Culture located in Harlem, N.Y.