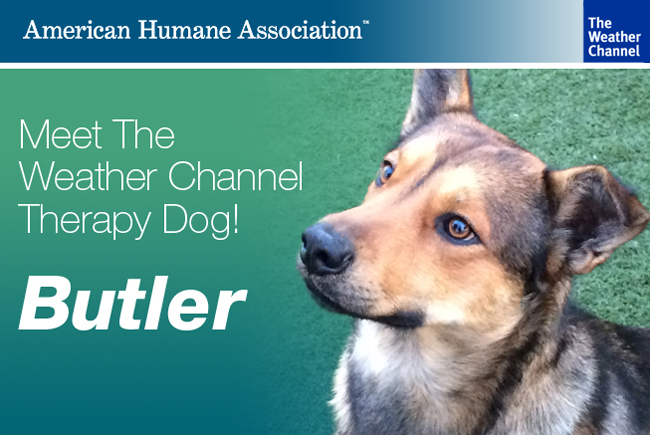 “Shelter dogs are not broken. They’ve simply experienced more life than other dogs. If they were human, we would call them wise. They would be the ones with tales to tell and stories to write, the ones dealt a bad hand who responded with courage. Don’t pity a shelter dog, ADOPT one. And be proud to have their greatness at your side.” — Author unknown

Last December, The Weather Channel® announced that it was partnering with the American Humane Association in order to find and train a shelter dog to be the official Weather Channel Therapy Dog for victims of weather disasters. The dog would visit schools, hospitals, shelters and more to bring love and support to those communities impacted.

Recently, The Weather Channel introduced viewers to the five finalists. This effort is helping the nation recognize the health benefits and talents of pets and, more importantly, shifting the negative perception of shelter pets as being “broken” or “bad” animals. Often, these animals were victims themselves due to the nation’s pet overpopulation problem. With a loving home and training, rescue pets can give back to the community in a powerful way by serving as therapy pets or search and rescue animals.
Here are just a few examples:

Studies also show that shelter animals can reduce the risk of cardiovascular disease, prevent against respiratory infection, lower stress, boost self-esteem, lower blood pressure, protect against allergies, ward off depression, and boost oxytocin and serotonin levels (the “feel good” hormone). Many provide assistance to those with disabilities like blindness, deafness, epilepsy, autism and diabetes. Most recently, a new study is investigating dogs’ ability to sniff out ovarian cancer.

All of these add to the many reasons to consider shelters when seeking a new pet. Adoption creates new lives for these powerful contributors to the health of our communities.