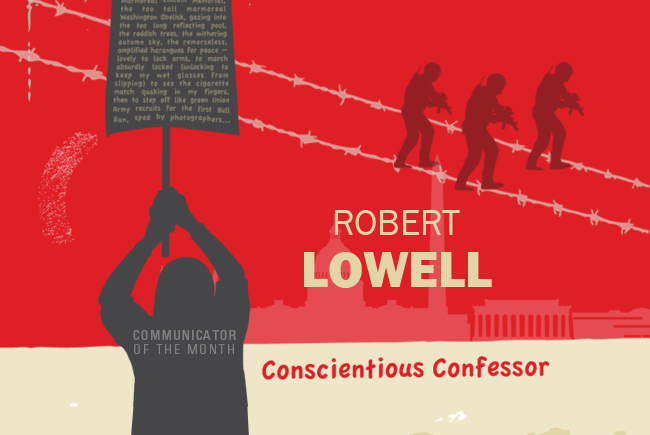 “If youth is a defect, it is one we outgrow too soon.” ― Robert Lowell

Born in the year the U.S. entered World War I (1917), Robert Lowell was one of the nation’s leading poets and an outspoken social activist.

When the U.S. joined World War II, Lowell volunteered for military service, but was rejected because of his poor eyesight. In the next few years, the vision requirements were relaxed and Lowell received a draft notice in 1943.

Deeply troubled by Allied bombing of civilian targets, Lowell was jailed for several months for declaring himself a conscientious objector. During this time, he completed “Land of Unlikeness,” a collection of 42 poems that was revised in 1946 as “Lord Weary’s Castle,” and in 1947 won the Pulitzer Prize for Poetry.

In the 1960s, Lowell was socially engaged as a political activist. Although he was friends with Robert Kennedy, Jacqueline Kennedy and Eugene McCarthy, he publicly refused an invitation to the White House Arts Festival in 1965 to show his disapproval of the then-escalating Vietnam War, and participated in the 1967 March on the Pentagon.

In the 1970s, Lowell received another Pulitzer Prize for “The Dolphin,” a collection of love poems. His last book, “Day by Day,” was published in 1977, the year of his death.