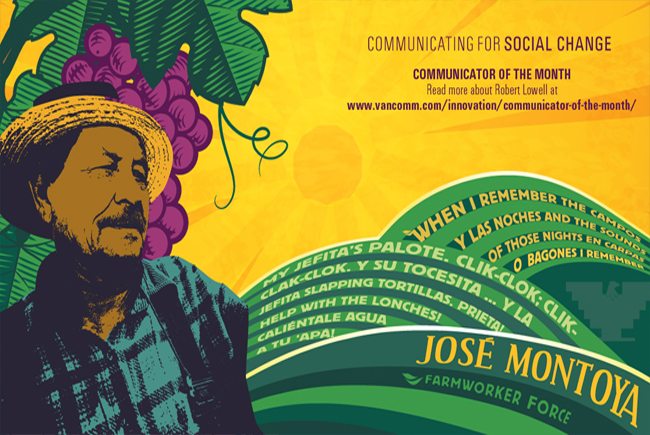 “We’re not Canadians, we’re Chicanos, but we have an air force, we fly adobe airplanes.” ― José Montoya

José Montoya, born in May 1932, began his life picking grapes alongside his family in Central Valley, Ca. In the 1970s, he co-founded the Royal Chicano Air Force, a collection of artists-turned-activists who used their words, music and images to fight for justice and equality for farmworkers and other marginalized Americans.

Montoya’s work, which explored themes of struggle and injustice, galvanized the Chicano movement in the 1960s and ’70s. His first literary success came in 1969, when nine of his poems were published in the anthology “El Espejo.” He went on to publish poems in chapbooks (small collections of poetry), pamphlets and small-press collections. Montoya’s use of the hybrid “calo” language, which combines English and Spanish slang, attracted considerable attention.

Ray Gonzalez, a contributor to The Nation, described Montoya’s “In Formation: 20 Years of Joda” as “perhaps the definitive collection of calo writing to be found anywhere.”

In 2002, Montoya was named poet laureate of the city of Sacramento, Ca. For his featured project, he chose to organize a Festival of Flower and Song, which celebrated poetry as a means of sharing cultures and emphasized the role of poetry in expressing reverence for life and social justice. Montoya died in September 2013.