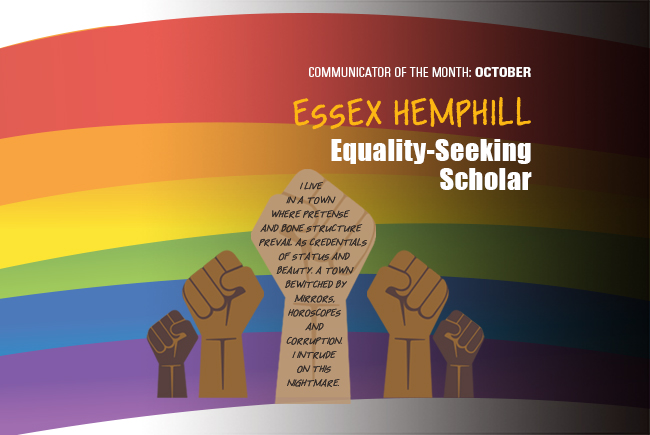 “The sacred constructions of silence are futile exercises in denial. We will not go away with our issues of sexuality. We are coming home. It is not enough to tell us that one was a brilliant poet, scientist, educator or rebel. Whom did he love? It makes a difference.” ― Essex Hemphill

Essex Hemphill was a poet-activist who, through his work, championed issues related to race, identity, sexuality, HIV / AIDS and family as they related to the gay black community. His voice on these issues still resonates today.

Hemphill was born in Chicago in 1957, and raised in southeast Washington, D.C. By age 14, he was channeling his perspectives into poetry. He published his first book in 1985 and his last in 1992, with his work appearing in anthologies for years afterward.

Hemphill’s writings brought readers the despair and joys of his experiences as a gay black man. He also became a face of AIDS, confronting sexual taboos and homophobia. In doing so, he united black lesbians and gay men.

Not only did Hemphill address controversial issues in his work, but he also faced confrontation head-on. For instance, when Washington, D.C.’s Commission for the Arts requested that Hemphill remove the word “corruption” from a public recital of the poem, “Family Jewels,” Hemphill agreed. Then, he presented the entire poem anyway.

Hemphill died in 1995 from complications related to AIDS.