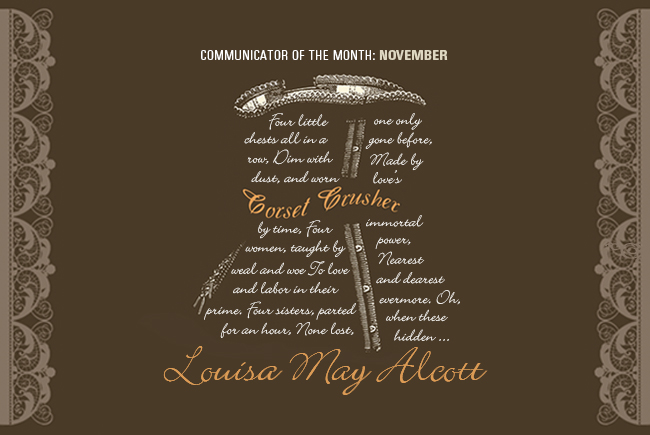 “But the spirit of Eve is strong in all her daughters.” ― Louisa May Alcott

Our Communicator of the Month series showcases individuals who have used communications to work for a better future. In 2014, we’re celebrating poets who have communicated social change through their meter, cadences and rhyme.
Louisa May Alcott, born in 1832, may be best known as the author of “Little Women,” but she also wrote poetry, where she advocated for women’s rights and the abolition of slavery. Her first published work, “Flower Fables,” is a set of fairy tales written for Ralph Waldo Emerson’s daughter. By 1860, she was writing for the Atlantic Monthly, and at age 35, she published “Little Women.”

Alcott’s poetry reveals who she was as a person. In particular, three poems, “The Lay of a Golden Goose,” “Thoreau’s Flute” and “In the Garrett” are believed to be at least partly autobiographical.

Outside of her poetry, Alcott was a staunch supporter of abolition and women’s rights. In particular, she is believed to have attended antislavery meetings and housed a fugitive slave in 1847, risking imprisonment and / or lynching.

During the Civil War, Alcott served as a nurse at the Union Hotel Hospital in Georgetown, Va. This experience would be the muse for “Hospital Sketches,” a series of letters she wrote home while in service, published in 1863.