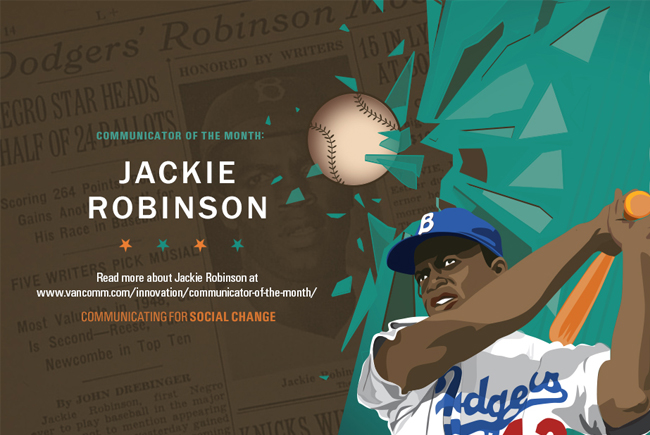 “I always believe I won’t have it made until the humblest black kid in the most remote backwoods of America has it made.” — Jackie Robinson

Jack Roosevelt “Jackie” Robinson was the first African-American baseball player to compete in Major League Baseball. He is credited with breaking the color barrier in professional sports when he signed with the Brooklyn Dodgers in 1947, though he had been paving the way for this accomplishment for a decade, having won the Pasadena region’s Most Valuable Player in baseball in 1938 while in junior college. His performance in professional baseball ranks among the best, helping the Dodgers win several pennants and a World Series title. He retired in 1957 with an excellent .311 batting average and more than 20 years of playing baseball.

Robinson’s work as an advocate for racial equality was not limited to his groundbreaking work in baseball. He was drafted into World War II, and while in boot camp, was ordered to sit in the back of a segregated military bus. He refused to move, was arrested and court marshalled. Ultimately, Robinson was acquitted of the charges and received an honorable discharge.

Years later, Robinson championed the civil rights of African-Americans when he testified before the House Un-American Activities Committee on discrimination in 1949. Three years later, he publicly criticized the New York Yankees for not having integrated their organization. Even after his baseball career ended in 1957, Robinson remained an active advocate for equality, continuing to lobby for greater integration in sports. He also helped establish Freedom National Bank in Harlem, then the largest African-American-owned and -operated bank in New York state, and was a board member of the National Association for the Advancement of Colored People.

Robinson was born in 1919. After his death in 1972, his family created the Jackie Robinson Foundation, which helps provides scholarships and mentoring programs to young people in need.