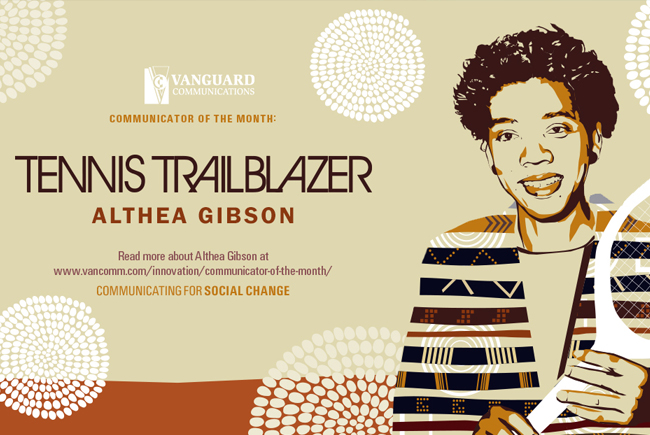 “Shaking hands with the Queen of England was a long way from being forced to sit in the colored section of the bus going into downtown Wilmington, North Carolina.” — Althea Gibson

Just as Jackie Robinson broke racial barriers in professional baseball, Althea Gibson penetrated professional tennis. Born in 1927 in South Carolina, Gibson’s road to tennis stardom was made more difficult by the discrimination she faced as an African-American. She was challenged not only by incredible talent on the court, but also deep-seated racism in the venues in which she played, her sport and American society.

Her tennis career began when she left high school early and began competing in the American Tennis Association, which was almost all African-American. She would go on to complete her high school degree while becoming a two-time national African-American women’s tennis champion.

Gibson pressed for admission into the 1950 U.S. National Championship, which at that time only allowed white players. With advocacy and help from Alice Marble, a four-time winner of that event, Gibson was admitted and won her first major in 1956. She won several other tournaments after 1956 and went on to become the first African-American to be voted Associated Press’ female athlete of the year. She won the award again in 1958, the year she took home wins at Wimbledon and the U.S. National Championship — competitions that saw her hoist the first place trophy more than once.

Gibson won 56 singles and doubles championships before turning pro in 1959. She died in 2003.