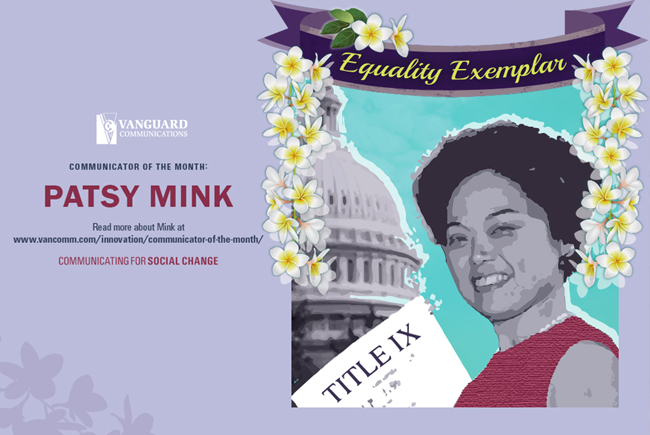 “If to believe in freedom and equality is to be a radical, then I am a radical.” — Patsy Mink

Patsy (Takemoto) Mink may not have been a professional athlete, but her effect on U.S. athletics is among the most profound. As the principal author of Title IX, her work is largely responsible for the exponential growth of women’s athletics — both amateur and professional — since 1972.

Mink was a Japanese-American from Maui, Hawaii, who, despite graduating valedictorian from her high school and receiving a bachelor’s degree in zoology and chemistry, was denied entry into more than a dozen medical schools. After taking several menial jobs, she was eventually encouraged to apply to and attend law school. She graduated with a law degree from the University of Chicago and returned to Hawaii to practice law.

In 1964, Mink was elected to the U.S. Congress, where she helped usher in many of President Lyndon B. Johnson’s Great Society welfare programs. In 1972, she made history by helping bring about one of the greatest leaps forward in both American sports and education — Title IX of the Educational Amendments of 1972. Title IX protects people from discrimination based on gender in education programs or activities receiving federal funds. This opened significant opportunities for women in education, as well as sports. In 1971 – 1972, before Title IX was enacted, approximately 7 percent of girls participated in high school sports. By 2010 – 11, this number had increased to 41 percent.

Mink died in 2002. In that year, she received numerous tributes, including the renaming of Title IX to the “Patsy Takemoto Mink Equal Opportunity in Education Act.”