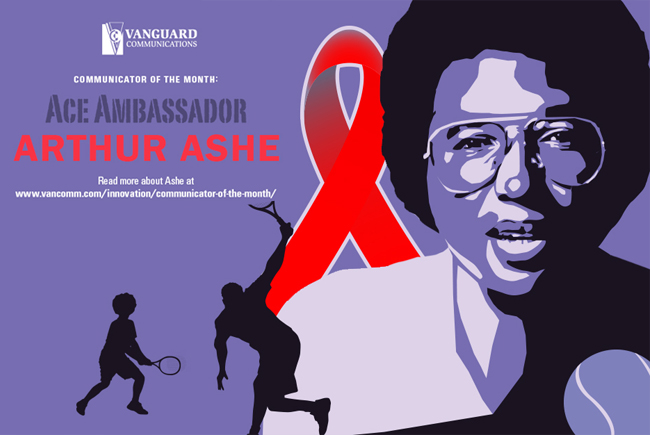 Arthur Ashe is the first — and remains the only — African-American male to win the U.S. Open and Wimbledon tennis championships. He also is the first African-American both to be ranked the world’s No. 1 professional tennis player, and to be inducted into the International Tennis Hall of Fame. Born in 1943 in Virginia, Ashe won the U.S. Open in 1968 and defeated tennis legend Jimmy Connors to take the Wimbledon title in 1975.

Ashe’s performance on the court helped propel him to fame, but his extensive advocacy work kept him in the public spotlight longer after he retired. Understanding his unique position as an early African-American champion in a predominantly white sport, Ashe leveraged his fame to establish the Association of Men’s Tennis Professionals, to serve as chairman of the American Heart Association, to create inner city tennis programs and to speak out publicly against apartheid in South Africa.

His advocacy work, however, did not stop there. In 1992, Ashe went public with his AIDS diagnosis and spent considerable effort raising awareness of the disease. Some of his AIDS advocacy activities included speaking at the United Nations and starting a new foundation. Even as his health deteriorated, Ashe remained a staunch advocate for human rights. To protest U.S. treatment of Haitian refugees in 1992, Ashe went to Washington, D.C., where he was arrested along with fellow protesters.

Ashe died in 1993 from AIDS-related pneumonia.