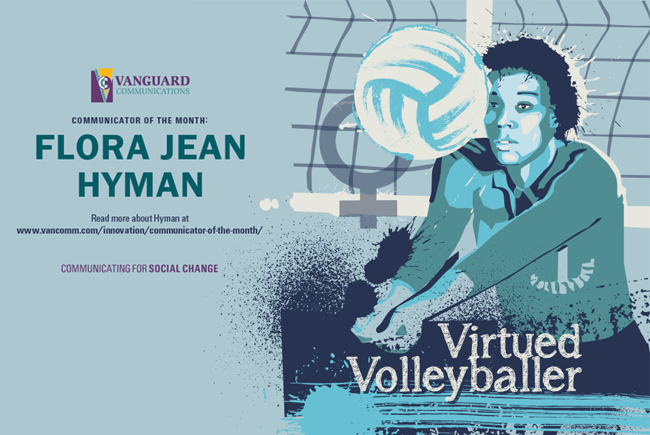 “To be true to oneself is the ultimate test in life. To have the courage and sensitivity to follow your hidden dreams and stand tall against the odds that are bound to fall in your path. Life is too short and precious to be dealt with in any other fashion. This thought I hold dear to my heart, and I always try to be true to myself and others that I encounter along the way.” — Flora Jean Hyman

Flora “Flo” Jean Hyman was a U.S. Olympic silver medalist in volleyball, whose career ended suddenly in 1986 when she collapsed and died on the volleyball court from Marfan syndrome, a genetic disease. Hyman was born in California in 1954 and discovered volleyball in high school. From there, she went to the University of Houston, and then to Volleyball World Championships and the U.S. Olympic Volleyball team. As an Olympian, Hyman led the U.S. to a silver medal in 1984, losing the gold to China. She was also named to the 1980 Olympic team, but did not play, as the United States boycotted the Moscow Olympic Games.

Although her impact on U.S. volleyball cannot be overstated, Hyman’s impact on women’s sports overall may have been even greater. As early as college, it was clear that Hyman cared deeply about promoting and sustaining women’s sports. She was the recipient of the first women’s athletic scholarship from the University of Houston, but she refused part of the scholarship to allow some of her teammates to receive funding, as well.

After the 1984 Summer Olympics, Hyman advocated to strengthen women’s sports by working with Coretta Scott King, Geraldine Ferraro and Sally Ride to lobby for the Civil Rights Restoration Act of 1987 and strengthen Title IX of the Educational Amendments of 1972, which protected people from discrimination based on gender in education programs or activities that received federal funds.