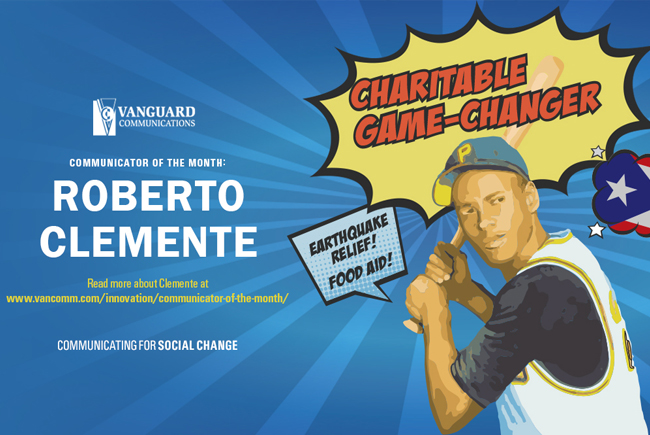 Roberto Clemente was born in Puerto Rico in 1934, and came to the United States to play with the Brooklyn Dodgers minor league team, the Montreal Royals, in 1954. His professional career began in 1955, and Clemente won four batting titles in the 1960s. He appeared in the 1971 World Series, playing for the Pittsburgh Pirates from 1955 until his tragic death in a plane crash 1972 while he was en route with supplies for earthquake victims in Nicaragua.

Well-known for his charitable work in Latin America, Clemente was an outspoken critic of segregation and racism in the United States. Being from Puerto Rico, he was relatively unfamiliar with segregation and found it appalling. In one instance, he watched a teammate get dragged off his bus for buying a drink from an all-white gas station. He also went through spring training in deeply segregated Florida, where he and other teammates had to eat on the bus, while white teammates ate in restaurants.

Martin Luther King, Jr., was Clemente’s hero. His admiration ran so deep that when the Pirates were scheduled for an opening day game on April 8 — the day before King’s burial — Clemente convinced the team to move opening day to April 10, effectively putting sports in its proper perspective.

Clemente was the first Hispanic player to reach 3,000 hits, including 240 home runs. He also won the Golden Glove Award for 12 consecutive years for his work as a right fielder. The year after his death, Clemente was elected to the National Baseball Hall of Fame.