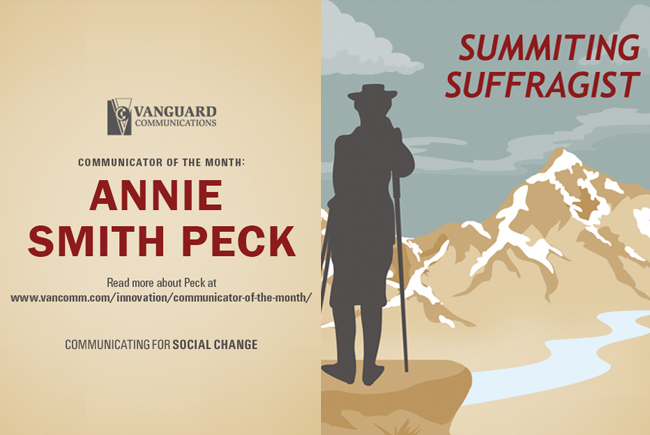 “That women’s sphere should be prescribed by men, that men know better what is womanly and what we are capable than we do we ourselves, has not seemed to me logical or proper.” — Annie Smith Peck

Born in Providence, Rhode Island, in 1850, Annie Smith Peck took up the sport of mountain climbing at age 44. She became the third woman ever to scale the Matterhorn in the Swiss Alps — and the first to make the climb in pants instead of a skirt. She climbed other mountains throughout the world, including a record-breaking ascent of Peru’s Mount Huascarán in 1908.

The peaks she summited were rivaled only by the heights she reached as an advocate for women’s voting rights. Peck’s work in the women’s suffrage movement included helping campaign for Charles Evan Hughes in his 1916 run against President Wilson. Hughes was a supporter of a women’s suffrage amendment, and Peck joined the “Hughes Special” train for part of its trip from the East Coast to the West Coast and back again, with stops along the way to deliver political speeches.

Peck’s other political activities included participating in marches, serving as the president of the Joan of Arc Suffrage League and writing editorials in favor of suffrage. Peck died in 1935.