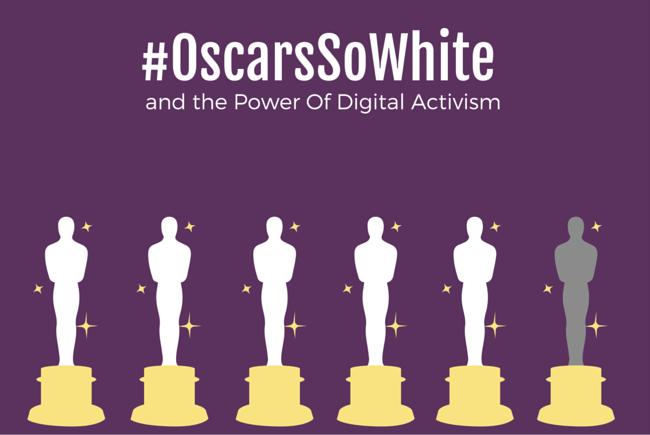 A new study by the University of Southern California’s Annenberg School for Communication and Journalism shows the lack of cultural inclusion in TV and film is even worse than we thought.

According to the study’s report of 414 films and TV shows released or aired in 2014:

Numbers such as these and the lack of diversity at the 2015 Academy Awards inspired April Reign — once a lawyer, now digital media editor — to create #OscarsSoWhite. We caught up with April to speak with her about #OscarsSoWhite and the power of digital activism.

Q: How did you get interested in using digital platforms like social media to address social and cultural issues?

A: It happened very organically. This Twitter conversation became an extension of a conversation I was already having with people. I was watching the 2015 Oscars and I took to Twitter to vent my frustration at the lack of diversity among the nominees.

Q: The absence of widespread racial and cultural inclusion among major motion picture characters and storylines has been noted for a very long time. How did #OscarsSoWhite become an entry point for that ongoing conversation?

A: I’d like to say there is a really sexy story behind it all. Initially it was a humorous hashtag. An early tweet said #OscarsSoWhite they asked to touch my hair. But then it pivoted to a more serious conversation about the lack of diversity in the film industry.

Q: How did #OscarsSoWhite evolve into an Oscars boycott that has attracted praise from people like Jada Pinkett Smith, Spike Lee and Mark Ruffalo?

A: I really appreciate the support. It shows some of the best ideas are often the simplest. Those three words together tell the complete story. It’s easy to understand. People see it and they want to know more. They get that this marginalization is based on race, sexual orientation, gender, physical ability, etc. This isn’t just about Black people. The numbers for Latinos and Asians in the film industry are even worse.

Q: Tell us about the alternative programming event you’re promoting for Oscar night. Do you think it has the potential to move from social media conversation to changes within the movie industry?

A: We’re going to live-tweet a film … The Wood … during the Oscars telecast. I don’t know that the event itself will motivate change in the film industry. But if moviegoers are frustrated by the lack of diversity in film, I’d encourage them to not reward the Academy of Motion Picture Arts and Sciences with their viewership.

Q: What are some of the most important lessons you’ve learned about activist engagement via digital media?

A: I’ve learned that hashtag activism can be successful when you galvanize people around an easily understandable issue. Since last year, the Academy has made changes in its makeup. The changes the Academy has announced are a very good first step toward producing more films that meaningfully reflect our society’s diversity.

Q: What are your thoughts on the relationship between hashtag activism and Black Twitter or other social movements?

A: A common refrain is it’s just Twitter, but I take issue with that. We’re on Twitter and we’re seeing change occur in stalwart organizations like the Academy. This isn’t the first time. We’ve seen people gain and lose jobs because of Twitter. It changes offline behavior and I believe that will continue. It can be life-changing. The things that have occurred for me have been nothing less than astonishing.

Digital platforms by their very nature provide us as online communicators with the opportunity to hone our messages down to their most essential and compelling elements. Part of the beauty of #OscarsSoWhite and other hashtags is their concise way of tapping into the experiences of a given audience and turning messages into movements.