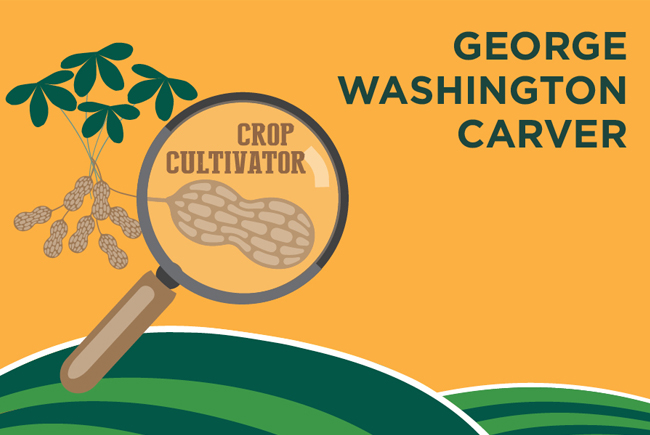 “When you can do the common things of life in an uncommon way, you will command the attention of the world.”

Despite being born into slavery, George Washington Carver became one of the most prolific scientists of his time. He developed more than 100 different uses for the peanut, including a bioplastic and a substance similar to gasoline. He also pioneered agricultural methods that increased crop yields and he taught these methods to fellow African-Americans.

In a relatively short time after the abolition of slavery, Carver became the first African-American to be admitted into Iowa State’s College of Agriculture and Life Sciences. While enrolled, he studied botany and plant pathology and completed both his bachelor’s and master’s degrees.

After his time at Iowa State, Carver joined the Tuskegee Institute, the famed African-American school led by Booker T. Washington. Carver’s brilliance elevated and shaped the school’s agricultural department until it became world-renowned. Carver’s brilliance was held in such high regard that he became a member of the British Royal Society of Arts — a rare accomplishment for an American. In addition, both President Theodore Roosevelt and Mahatma Gandhi sought his counsel on agricultural matters.

Carver also leveraged his status to promote racial harmony in the United States. Between 1923 and 1933, he took his message directly to white Southern colleges. Some of the more radical advocates of the time criticized his approach, though none could deny the significant improvements he helped bring about.