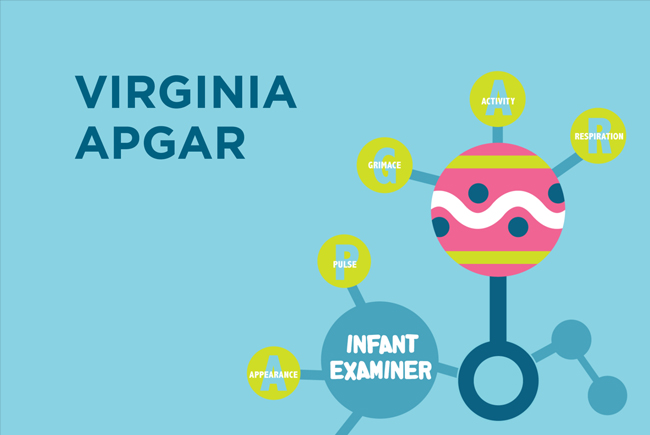 “Nobody, but nobody, is going to stop breathing on me!”

Virginia Apgar, M.D., created the first test given to infants shortly after birth to assess their health and determine if they require any special supports. Apgar also was the first woman to become a full professor at Columbia University College of Physicians and Surgeons, and ultimately became one of the early leaders of an organization that was the precursor to the March of Dimes, a nonprofit organization that funds research and programs to end premature birth, improve infant health and put a stop to infant mortality.

The test developed by Apgar, called the APGAR Score, is used to assess appearance, pulse, grimace, activity and respiration. She developed this test when anesthesia routinely was given to women during childbirth, and the test eventually became the accepted standard worldwide.

Apgar graduated from Mount Holyoke College with a degree in zoology and earned a medical degree from Columbia University College of Physicians and Surgeons. After graduation, she was steered into anesthesiology, and in 1938, became the director of the anesthesiology division at Columbia. In 1949, anesthesia research became an academic department, to which Apgar was appointed the first female full professor.

Apgar returned to school in 1959 to earn a master’s degree in public health from Johns Hopkins University. After receiving the degree, she committed herself to improving infant health through public education and supporting research.