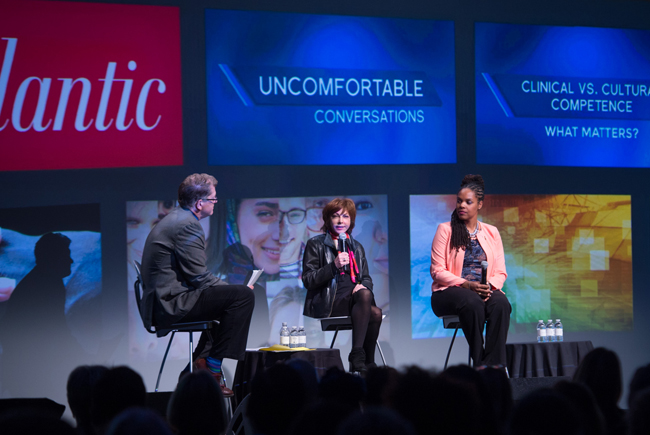 At this year’s 88th Annual Oscar Awards, the stage had 12 LED screens and thousands of dangling crystals in the background. At the 58th Annual Grammy Awards in February, the production team experimented with projection mapping on Lady Gaga’s face during her touching tribute to David Bowie.

In social change event production, our challenge — compared to the Oscars or Grammys — is that we seek to bring the best production techniques that will engage the audience and create a wow factor … without the Hollywood price tag. For one event that Vanguard produces every year, we also need to leverage the same stage for multiple events over the course of several days … all while striving for unique experiences that keep the attention of an audience of 4,000+.

Like the entertainment industry, we’ve found projection mapping to be a powerful tool in this regard.

Dynamic, projection-based stages are still relatively new to the conference world. They allow production teams to feature cutting-edge audio, video and lighting advancements to make events even better. Projection mapping allows you to tailor the images and videos that are shown behind each person or band performing throughout your event. To maintain continued excitement in your audience each time they enter the room, it is essential to have new and fresh images at every session.
Projection mapping can be as simple or complex as you need. Once you have a budget in mind, the next step is to determine the event space(s) for which you want to use projection mapping to enhance the audience’s experience. To do so, you should consider the following:

Vanguard provides the event production for the National Council for Behavioral Health’s annual NATCON Conference. We introduced projection mapping in 2015 as a strategy to create a more versatile brand experience without adding the burden of printing and replacing set pieces between sessions.

In 2015, we utilized 3D stage pieces to enhance the stage. For the 2016 conference, we applied these same projection mapping tactics to a 60-foot centralized screen. The available space in the corresponding ballrooms dictated the different needs and approaches for each year’s event.


In 2015, the NATCON Conference was at the Gaylord Palms in Orlando, Florida, where there is a permanent, built-in stage in the ballroom. As the stage is deep, we felt that it needed to have some dimension added to it. In 2016, the NATCON Conference was at Caesar’s Palace in Las Vegas, where we had to build the stage and lay out the room from the ground up. At Caesar’s Palace, we went with an oversized screen because the room was extremely wide and shallow, and we feared that the brand would be lost without a major focal point. However, we did bring back some of the 3D stage pieces for one special event in Vegas, to add yet another element to the event.


What we’re seeing with projection-based staging is that the sky is the limit. Even if you use the same stage pieces year after year, your background each time is a blank slate. The versatility of the technology allows us to continue to take events to the next level and continue to wow returning attendees.