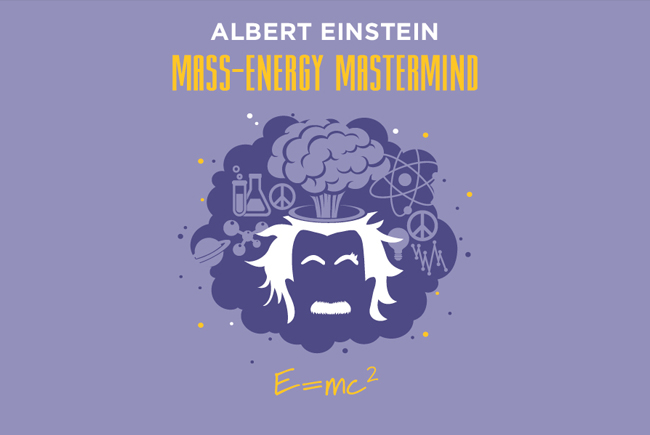 “We cannot solve our problems with the same thinking
we used when we created them.”

Albert Einstein’s groundbreaking contributions to physics are so extensive that his last name has become synonymous with the word “genius.”

Einstein was born in Württemberg, Germany, in 1879, and graduated from the Swiss Federal Institute of Technology in 1901. After graduation, he worked for the Swiss Patent Office. During this time, Einstein continued his education and submitted four physics papers as part of his work toward a doctorate degree. The papers were mostly ignored until Max Planck, the founder of quantum theory, took notice. From there, Einstein’s fame grew, and he moved ever closer to developing the seminal general theory of relativity. This theory was completed in 1915, and by 1919, he was recognized with a Nobel Prize in Physics.

Einstein fled Nazi oppression and came to the United States in 1932. In 1939, he co-wrote a now-famous letter to President Franklin D. Roosevelt to alert him of the possibility of a Nazi atomic weapon. Knowing that the Nazis could not be allowed to be the first to develop such a weapon, the United States began its own atomic weapons research, also known as the Manhattan Project.

After learning atomic weapons had been used on Japan to end World War II, Einstein became an advocate against them. In 1946, he formed the Emergency Committee of Atomic Scientists, but his advocacy work did not stop there. He also became a member of the NAACP and actively campaigned for the civil rights of African-Americans. Toward the end of his life, Einstein had withdrawn from the public. He died in 1955 from an abdominal aortic aneurism after refusing medical treatment.