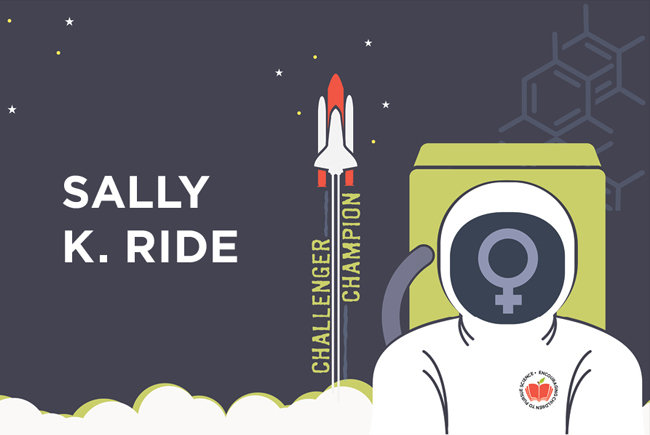 “For whatever reason, I didn’t succumb to the stereotype that science wasn’t for girls. I got encouragement from my parents. I never ran into a teacher or a counselor who told me that science was for boys.”

Not only was she a physicist and the first American woman in space, Sally Ride worked to encourage young people, especially girls, to pursue careers in science and engineering.

Her space career began in 1977 when, while completing her doctorate in chemistry, she answered a NASA newspaper ad for astronaut candidates.

After NASA found her to be up to the task, she boarded the Challenger shuttle on June 18, 1983, for a historic journey into orbit. She became the first American woman and youngest American in space. More important, she became a national hero. She also flew on the Challenger a year later, and served on the panels that investigated both the Challenger and Columbia shuttle disasters.

She retired from NASA to teach physics and write children’s books. During this time, she leveraged her national celebrity status to foster young people’s interests in fields related to science, technology, engineering and math. She established nonprofit Sally Ride Science in 2001, where she guided programs, materials and professional development programs.

She passed away in 2012 from pancreatic cancer, and was posthumously awarded the Presidential Medal of Freedom, civilian honor, in 2013.