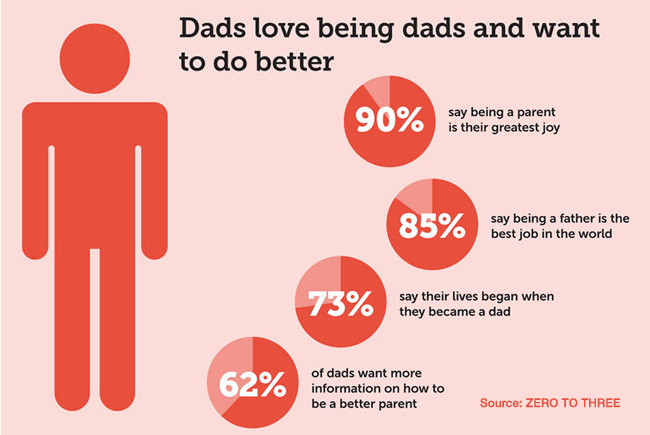 What if I told you that being a dad actually increases men’s level of health and lowers levels of aggression, or that 62 percent of dads want to be better parents?

As communicators, we know that data is a driving force in identifying underlying patterns of behavior and uncovering the “whys” and “hows” surrounding patterns of people’s experiences. We also know that storytelling is a powerful tool needed to paint a picture of the realities behind the data. But what is the best way to weave storytelling and data to effectively influence our audiences?

Our client, ZERO TO THREE, effectively combined stories and data during a recent unveiling of the results of their national parent survey, Tuning In: Parents of Young Children Tell Us What They Think, Know and Need. One of the survey’s key findings was that dads want to play a greater role in their child’s life and learn ways to be a better parent.

They released the findings at a media briefing and invited experts to explain the science behind the data, and also invited a single father to share his personal anecdotes about fatherhood. The father illustrated the findings and expressed his desire to play a more positive role in his daughter’s life by being more patient and bringing less tension into the home, as he knows it affects her wellbeing. He also shared his desire to be a better parent by learning from other fathers. By having that personal voice, ZERO TO THREE was able to effectively share the findings of this survey through a story that would resonate with a large audience.

Research shows that hearing people’s stories actually affects the brain and releases chemicals that make people empathize with others and motivates them to be a part of the solution.

As communicators, we must think of how we weave storytelling into our work to elevate the voices of those behind the data and motivate our audiences to share that message of social change.

If you’d like to learn more about ZERO TO THREE’s National Parent Survey, join their Twitterstorm today at 1:00 p.m. EST where they will touch on topics such as parenting, discipline and child development.