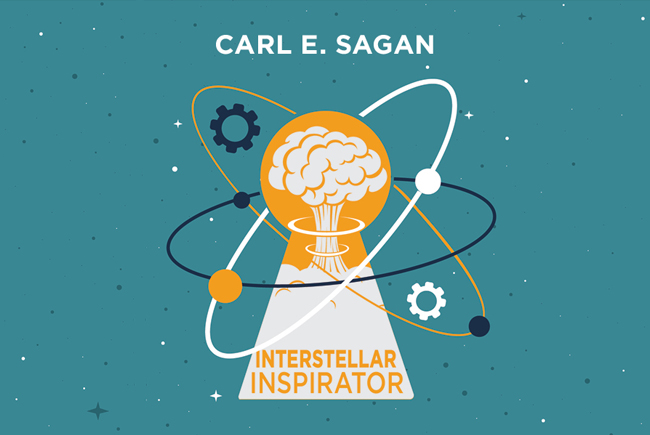 “Imagination will often carry us to worlds that never were. But without it we go nowhere.”

Long before the current-day popularity of Neil deGrasse Tyson, Carl Sagan was recognized for his work on the “Cosmos: A Personal Voyage” television series. His impact, however, was far greater than his television fame. His passion for scientific discovery and space has inspired generations of astronomers and other scientists.

Sagan was born in New York City and graduated from the University of Chicago with a degree in physics. Later, he earned a doctorate degree in astronomy and astrophysics. From there, he went to the University of California, Berkeley, where he contributed to many of NASA’s missions, including the Mariner 2 robotic probe.

By 1968, Sagan became the director of Cornell University’s Laboratory for Planetary Studies. While there, he worked with NASA to help determine locations for the Mars Viking probes. In addition, he assisted in the development of messages that were included with the Pioneer and Voyager probes.

Outside of “Cosmos,” Sagan had a major impact on American culture. He also served as a consultant on Stanley Kubrick’s movie, “2001: A Space Odyssey.” In the 1970s and 1980s, he authored several books, one of which won a Pulitzer Prize and another that was adapted into a full-length feature film. In 1980, he founded the Planetary Society.

Sagan also did not hesitate to use his status as a national icon to advance his political goals, including supporting nuclear disarmament and opposing President Ronald Reagan’s Strategic Defense Initiative. In 1983, he coauthored an article that coined the term “nuclear winter” to describe conditions after a nuclear holocaust.

Sagan died from complications resulting from myelodysplasia, a disease affecting the blood cells.