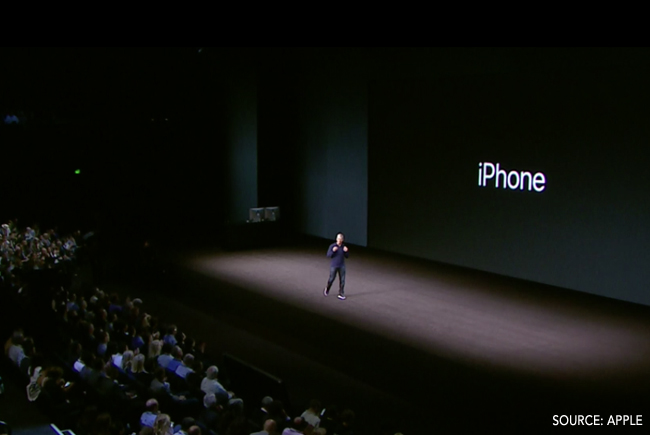 Yesterday, Apple held its long-awaited keynote, launching its next generation of gadgets and flagship iPhone. Year after year, Apple releases new products and some even break general convention or industry standards, yet popularity for their products remains high. There’s a buzz around this event, and I believe an essential part of the intoxication stems from Apple’s unique presentation style and its prominent use of black with its shiny, glossy, Darth Vader sheen. 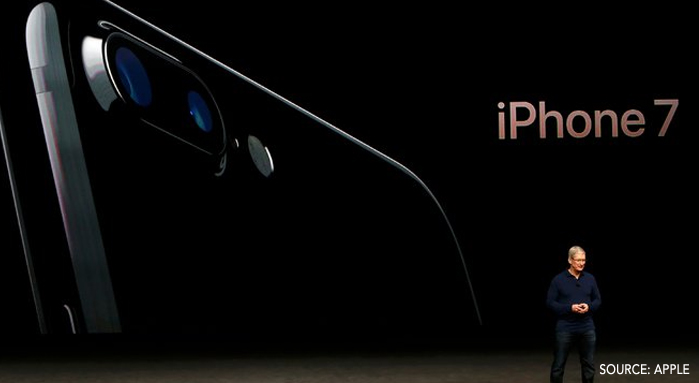 If you’ve seen any of the recent slew of films about Apple founder Steve Jobs, you’ll know that he was a minimalist as evidenced by his affinity for black turtlenecks.

Although leadership at Apple has changed, these core design principles carry on — with the apparent sartorial choice of slim fit navy collared shirts. Here are a couple takeaways from the Apple keynote that you should consider in your next presentation.

Apple does not use bullet points.

When creating presentations in PowerPoint, it’s natural to want to cram in as many bullet points as possible to make your case. Apple has a different approach: no bullet points at all. It believes that the presentation is just as much about the presenter as the supporting slides. In the case of the September 7 keynote, data were shown one at a time. Videos were introduced by the presenter who then left the stage to allow the audience to focus on it. They don’t confuse having content-heavy slides on-screen while the presenter gives an important verbal description. Why move to a less text-heavy format? Because it’s information overload — in fact, since 2007 some have even called PowerPoint a dead medium.

The rise of Snapchat, now surpassing Twitter in popularity, has shown that people like live video because of the authenticity and the immediacy of the engagement. Instagram used this approach to taut its Snapchat-like Instagram Stories feature. And (no surprise here), Instagram demoed Stories live onstage instead of with a more traditional presentation. 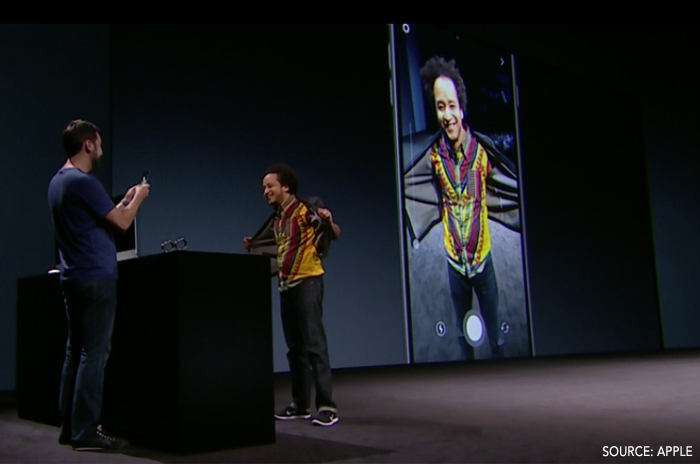 It was a funny moment, it was a great use of color in contrast with the black staging and it made the app seem easy to use. What we can learn from this is “seeing is believing,” and demoing a social media tool might be the best way to introduce your audience to it. If you have a social media campaign, try this at your next board meeting or community event.

Phil Schiller, Apple senior vice president of Worldwide Marketing, said it took courage for the company to make the controversial choice to eliminate the headphone jack. It does take courage to change an industry-standard feature, but Apple has a history of doing that. What that courage demonstrates to me is a confidence, a faith in the product. This courage is empowered by the minimalist approach to this presentation and engrained in the company philosophy.

I therefore challenge you to be courageous in your presentations. Develop the verbal presentation as much as the visual. Think of the presentation as more of a moment not to be missed, instead of a PowerPoint that can be emailed later.

Here’s a little homework for those who want to put this approach into practice. Check out this Ted Talk on PechaKucha about a presentation styles developed by architects that utilizes a timed PowerPoint of 20 slides that are each 20 seconds long. I promise you won’t snooze through the presentation.