Below, former and current Vanguardians share what they’ve learned from Maria that has helped them grow as professionals and as people.

Joe Kelly, former Executive Vice President, Vanguard Communications
Some define leadership as “doing things right” or “doing the right thing.” For Maria, this philosophy comes easy. Prioritizing the needs of clients, the company and the staff is simply in her DNA.

I have known Maria since she was a graduate fresh out of GW, and worked at her side for nearly 25 years. Her commitment to a set of core values — to the brand that is Vanguard — has been the foundation of every major decision made during that time, even when there was significant risk.

In one instance, the company was putting together its bid to re-compete a much-favored contract. Reliable intelligence insisted that the win strategy was to feature the resources of another organization on the bid. As we vetted the idea, we found that the deal lacked the integrity we thought essential to our technical and management model and to our Vanguard culture. Maria decided to go it alone, much to the chagrin of the team including some of our own senior staff. But she knew — as Maria always does — it was the right thing to do. She was right, and we won the contract!

Crystal Borde, Associate Director, Vanguard Communications
Dealing with an unhappy client is never any fun. During my first project management opportunity, I led a very difficult call with an upset client. Knowing I needed counsel to resolve the conflict, I sought a more senior team member for guidance. I’ll never forget how Maria stopped what she was working on and brainstormed solutions with me. She even joined me to call the client and coached me on how to present a win-win resolution for all involved. After the call ended, we had a constructive conversation about what I could do differently to avoid the same situation in the future.

During the experience, I never felt reprimanded or judged. I felt supported. Maria used the scenario as an opportunity for me to grow as a project manager. Through the years, I’ve often reflected on that conversation when fellow team members have been in similar situations. In those moments, I’ll ask myself “What would Maria do?” and pass that mentorship forward. Inspired by Maria’s leadership, I discover ways to turn their challenge into a teachable moment and help them develop into better professionals and communicators like Maria did for me.

Amy Ahn, Editorial Manager, Vanguard Communications
The date is Friday, December 4, 2015. Maria brings over some edits to my desk with a look on her face that’s a mix between amused, surprised and a little cautious. (Anyone who has worked at Vanguard knows this face.) I say “You didn’t like it?” She says, “No, I really didn’t!” She sits with me to wordsmith and help make the piece more engaging, relatable and lighthearted — more fun.

My favorite moments of working with Maria aren’t the after-parties or the gifts or the surprises. Although these elements make working at Vanguard incredible, they’re not the things that stick out. What I’ll always treasure about Maria is her dogged quest for perfection — to make something the best it can be. She’s taught me how to do that with words, but I know the results reach further. I’ve become a better version of myself. 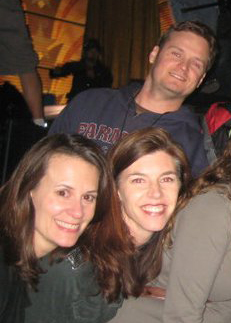 Our Hall of Famer

Driven and fearless to the core,
Never a challenge too great,
Always willing to do a bit more,
To speak out and advocate.

A colleague, a mentor, and always a guide,
A collaborator and unselfish leader,
A penchant for fun that won’t be denied,
And always our biggest cheerleader.

Every day we’re proud to proclaim,
She’s someone we respect and admire,
And this well-deserved spot in the hall of fame,
Writes a legacy sure to inspire.