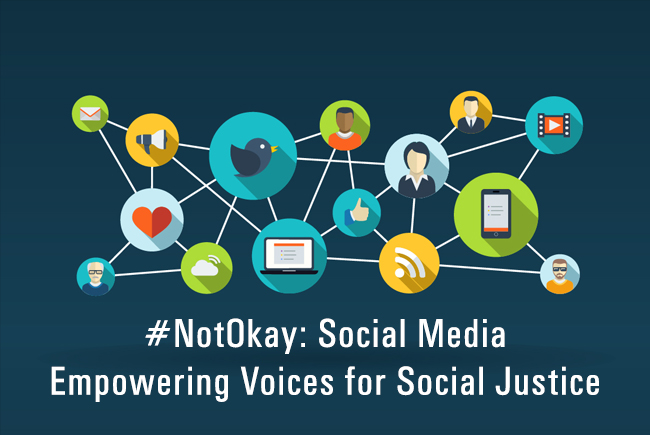 The sensitive subject of sexual assault took center stage during the second presidential debate on October 9. When candidate Donald Trump was asked about his crude comments boasting aggressive sexual behavior toward women, he downplayed his remarks as nothing more than “locker-room talk” with no actual incidents behind them.

Soon after, Canadian author Kelly Oxford took to Twitter, inviting women to help define sexual assault by sharing their experiences with hashtag #NotOkay. The author’s invitation struck a chord; by the next morning, the hashtag was trending 50 tweets a minute with horrific personal accounts of sexual assault.

In today’s super-connected reality, a prevalent issue too often silenced by shame and isolation has become a rally cry of solidarity and empowerment via the social media megaphone. Survivors are banding together under shared unjust experiences and lending their stories and voices to take back years of silence. Social media is empowering individuals — many of whom previously felt alone in their experiences — to come forth and find strength in their solidarity.

Social media has been a catalyst for such solidarity and demand for change before. Other examples include:

#StanfordRapeVictim is used in response to the short sentencing of former Stanford University swimmer Brock Turner, who was convicted of sexual assault and rape earlier this year. The victim’s court statement went viral after being posted on BuzzFeed with more than 13 million views. Twitter, Facebook and Instagram fueled discussions regarding the horrific acts of Turner using #StanfordRapeVictim and #BrockTurner to express outrage and messages of support for those who have experienced sexual assault and rape.

#BlackLivesMatter began in 2013 after the acquittal of George Zimmerman in the shooting death of African-American teen Trayvon Martin. It grew into a movement about the political and social empowerment of African-Americans with a focus on local issues. Today, the movement still garners attention online and off in response to police-involved shootings of African-Americans, many of which have been caught on video.

#Thisis2016 emerged when New York Times Editor Michael Luo tweeted an open letter to a woman who told him and his family to “go back to China.” With the recent backlash against Fox News and its stereotype-filled segment from New York City’s Chinatown, many Asian-Americans took to social media to share  what racism looks like today, giving voice to a community often disconnected from racial injustice conversations. Luo was compelled to invite other Asian-Americans to tweet him their racist encounters using the hashtag. Some responses have been compiled in this video.

As communicators, we aim to foster engagement and authentic dialogue. The examples above — and the outpouring of responses in each case — show how social media can facilitate relevant conversations like these. Let’s view social media not only as a distribution plan, but as a collection of conversations that you can contribute to.