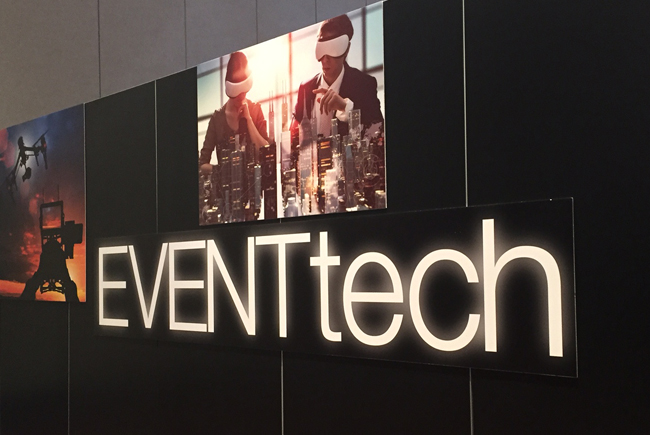 Last month, I had the opportunity to attend EVENTtech in Las Vegas with more than 1,000 other event managers. It gave me a chance to catch up with fellow industry leaders and learn about the ever-changing trends and advances in our space. I also got to have a little fun along the way trying out some of the newest technologies.

Along the way, I picked up key takeaways that can help launch your events into the new year.

1. Use both digital and traditional marketing to reach your audience.

A Nielsen study (commissioned by Snapchat) showed that Snapchat reaches 41 percent of all 18- to 34-year-olds living in the U.S. — 41 percent! In contrast, the top 15 U.S. TV networks reach only 6 percent of the same demographic, according to the study. For example, this past Cinco de Mayo, Taco Bell went viral launching the Taco Snapchat filter, which was viewed more than 220 million times during that week. The customized lens reached the Gen-Z population in all the right places — it gave users a fun, humorous feature that also raised awareness of the company’s products.

Technology was built for humans and exists to inform and connect us, but serves no use at any event if your audience won’t use it. Even among a non-tech-savvy audience there are ways to introduce technology to your attendees. Many conferences are starting to use near-field communications to have attendees share contact information, check-in to classes or share information with exhibitors. NFC is easy to use and adoption can be encouraged through incentives, such as prizes for attending the most sessions or visiting the most exhibit booths, among other offers.

3. Integrate your in-person and digital strategies.

You want to enhance the attendee’s experience without interrupting the live experience itself. As event producers, we want the attendee to share everything they are experiencing in real time with their online community. So, we need to provide them with the tools to do just that — whether that’s an event app connected directly to their social media accounts, a selfie station at the event that encourages photo sharing or an event hashtag. A great example of this is Ringling Bros. and Barnum & Bailey’s new app that is changing the ways families experience the circus.

Have you ever wondered how long someone stood in line at registration or how many people visited a certain area within your event space throughout the event? Technology like beacons can help you see this and many other behaviors happening at your event. They also can help you target attendees in a certain area within your venue, even sending them specific messages through your app as they pass by a specific beacon. In 2016, Bonnaroo employed more than 114 beacons in and around their venue in Tennessee, using them to help consumers locate the nearest water stations or medical tents, among other things. These targeted messages boosted attendee experience so much that 25 percent of fans who downloaded the official festival app opted in to engage with beacon messaging.

If you aren’t live streaming events, you are missing a big opportunity. According to a recent Ticketmaster study, 69 percent of millennials say seeing a live stream makes them more likely to go to the real-life event in the future. The catch? To keep your audience engaged you also need to provide exclusive digital content to these viewers — behind-the-scenes looks, backstage interviews, the event itself from a different angle, etc. It’s even better if these different viewpoints are shown on different digital platforms. Even the GRAMMYs have noticed that people tuning in are starting to care less about the awards and more about the music. That’s why in 2016, you could stream the Red Carpet Live online, or if you tuned in on TV, you saw a live four-minute ad produced by Target starring Gwen Stefani.

Five years ago, projection mapping and holograms were the new kids on the block. Today, it’s HoloLenses and virtual reality. However, don’t be seduced by the technology or get swept up in the next big thing: Identify technology that will get you to your end result and engage your audience.