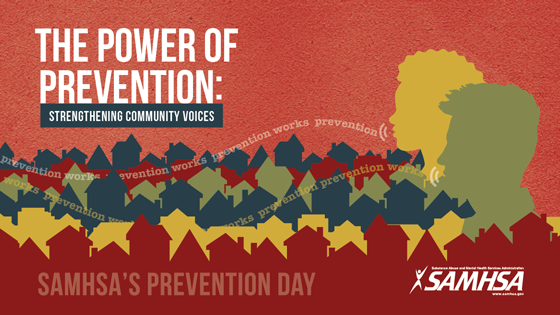 Do you know someone who has struggled with substance misuse or a mental health issue? Chances are you do.

According to the Substance Abuse and Mental Health Services Administration’s (SAMHSA) 2014 National Survey on Drug Use and Health, nearly 15 million Americans ages 12 or older used prescription drugs non-medically in the past year. As many as 6.5 million did so in the past month.

Further, an estimated 43.6 million Americans ages 18 and up experienced some form of a mental health issue.

Together, as a community, we can begin to change these statistics and the lives they represent.

To the frustration of many parents, the battle against underage drinking and substance misuse often ends in defeat. Alcohol remains the most widely used substance among youths ages 12 to 20. However, after a decade of policies focused on prevention, the current level of underage drinking continues to decline, dropping from 17.6 percent in 2002 to 9.6 percent in 2015. Prevention works.

To keep this momentum going, SAMHSA, in partnership with Community Anti-Drug Coalitions of America’s (CADCA) National Leadership Forum, will host its 13th annual Prevention Day, “The Power of Prevention: Strengthening Community Voices,” on Monday, February 6, from 8:30 a.m. to 4:45 p.m. at the Gaylord Hotel at the National Harbor. At the free event, prevention practitioners, community leaders, researchers, and consumers will attend workshops and other sessions on the power of prevention and how to address it within their own communities.

Participants will partake in a Community Forum moderated by NBC4 news anchor Pat Lawson Muse, which will feature prevention community leaders and experts from across the country.  SAMHSA’s Prevention Day also showcases the agency’s multimedia resources addressing topics such as underage drinking, suicide prevention, prescription drug misuse and abuse, and youth marijuana use.

On February 6, use the hashtag #PreventionDay on Twitter to share insights, ask questions, or recommend strategies for addressing prevention within communities. We hope you can join us!