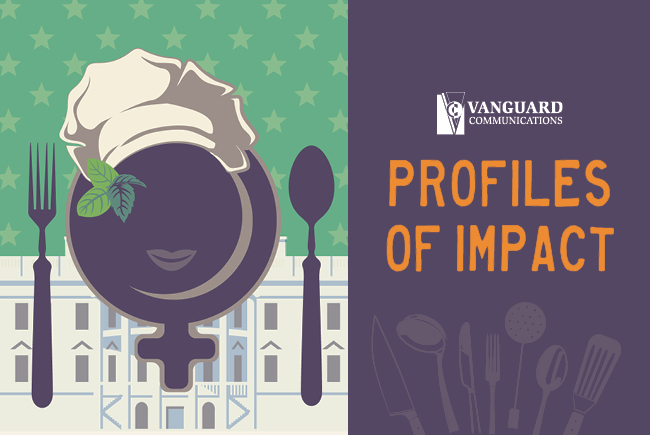 Back in 2005, while sitting in a board meeting of Women Chefs and Restaurateurs (WCR), it was announced that long-time White House chef Walter Scheib had been asked to resign his post. Immediately, the board knew we had a tremendous opportunity to influence First Lady Laura Bush to make history and select the first woman for the role.

At that time, women made up more than 50 percent of food service workers, yet held less than 4 percent of the top management jobs in the field, such as Executive Chef. The White House job was the top job: What better way to inspire the advancement of women than by providing a high-profile role model?

With no White House connections on the board, we launched a communications campaign to reach the First Lady. We wrote a letter to Mrs. Bush, noting that “throughout history, women have been at the helm of feeding America’s families; now is the time to have a woman at the helm of feeding America’s First Family.” Then at Vanguard, we got busy calling food reporters at the nation’s top newspapers, earning coverage of the letter and WCR’s campaign in dozens of newspapers and their syndicates, as well as on news/talk radio programs and online outlets nationwide.

As a result of the national attention, WCR was invited to play a role in the selection process, which culminated in the historic appointment on August 15, 2005, of Cristeta Comerford as White House executive chef. Media coverage worldwide credited WCR for influencing the White House decision.

Watching as First Lady Laura Bush took the historic step that day was an amazing reward for the hard work WCR and Vanguard committed to this issue. Yet more important, we raised public and political awareness of the challenges facing women in the culinary arts. We shattered a thick glass ceiling that day.

In 2006, Vanguard was grateful to be named a PR Week Awards finalist in the category of “Nonprofit Campaign of the Year” for its partnership with WCR on the White House chef campaign.

Cristeta Comerford has been the White House executive chef from 2005 through the present, serving three Presidents and First Ladies. We know, however, that her impact has been felt far beyond 1600 Pennsylvania Avenue.

Established by Barbara Tropp and seven pioneering women chefs and restaurateurs in 1993, WCR is an active resource for women seeking to advance culinary education and gain recognition in various areas of the food and beverage industry. Through invaluable experiences and opportunities, WCR helps leverage the voice of talented women, helping to elevate their position while building a strong connection of industry peers. These connections have influenced the careers of many notable chefs today.