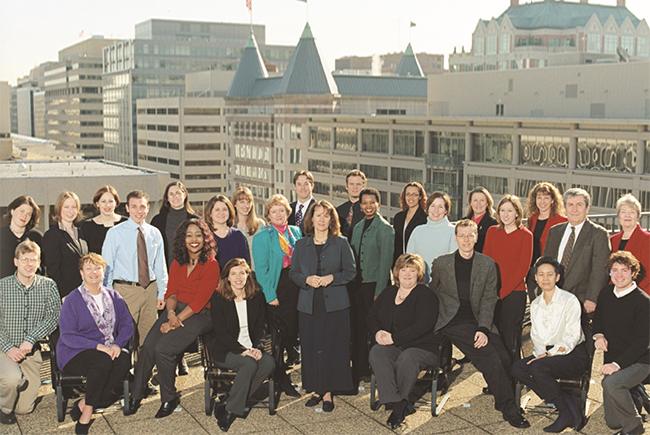 During Vanguard’s 30 years, talented staff members have been the building blocks of our success. It is with great delight that we can say many of our employees have been with us for more than half of our existence!

To commemorate all the experiences of these tenured Vanguardians, we asked them questions about their journey thus far — and their vision for Vanguard’s future. Take a look at their responses and some really fantastic flashback photos!

What is your favorite memory of your time at Vanguard?

“In March of 2003, Vanguard unexpectedly won the PR Week Award for Agency of the Year. We entered at the last minute on a lark, and we were shocked to learn we had made the finals. The management team traveled to New York for the ceremony, where we expected to just enjoy being nominated. We laughed when the car we ordered to pick us up from the hotel ended up being a limo. We almost fell out of our chairs when we were named the winner of the Mid-sized Agency of the Year Award. It wasn’t until a few minutes later that we realized we were now in the running for the overall award. When they called our name, we just looked at each other in total disbelief. As we walked up to the stage, everybody kept asking us, “Who are you?” That was a pivotal moment for our firm. And boy was it fun when the limo came back to pick us up — it’s probably as close as any of us will get to an Oscar moment.” — Brenda Foster

“My favorite memory at Vanguard is September 11, 2001. I had been with the company for only two years and I was the receptionist at the front desk when I got a call about what was going on from then art director Ryan LaLonde who was home watching the broadcast about the attacks at the Twin Towers. Quickly, the few people that were at Vanguard for the morning convened in the conference room and decided what our next steps would be. Would we go home? Would we stay at the office until later? What direction was each person going? That day, the area around the office was in chaos. I remember stepping out on the street — you could see the smoke in the sky from the Pentagon. While this wasn’t a favorite memory for our country, this will always be a favorite memory about Vanguard for me because of how we pulled together. I remember Mr. Kelly taking charge in the conference room, distributing money for people who wanted to get home by cabs, and being concerned about how folks were getting home — or in my case, down to my kids’ school to pick them up. His sense of concern about us and our loved ones touched me and impressed me so much. I was still fairly new to the company and to see that those that I work for care for me on a personal level really felt good.” — Ebonei White

“In 1999, in Vanguard’s old space at 19th and K Street, the accounting department (which Karen and I shared) was behind a fire door. One day the door shut and would not open! We were trapped for about two and a half hours with no way out. I remember Karen and Tracy passing tools through the ceiling trying to figure out a way to get us out safely. Karen even tried to crawl out through a window at the top of the door! Nothing worked…we were waiting on the fire department to come when Joe wiggled the handle and it opened.” — A Gilley

How has the way in which you do your work changed over time?

“The culture at Vanguard has stayed pretty consistent over the years, and we continue to work hard, but find time to enjoy the triumphs together and sometimes blow off some steam.” — Rhea Jones

“I remember faxing press releases to reporters and handing a co-worker a 5¼ inch floppy disk and saying “Here is the document.” I put in Vanguard’s first network, which was one server, a few PCs and two printers — all in one location. Now I manage multiple virtual servers and a variety of laptops, printers and phones that are connecting from multiple locations. In all honesty, I love technology but I still prefer walking to my co-worker’s offices and talking face-to-face.” — Tracy Ferrell

What look/style do you regret showcasing at Vanguard?

“Looking back at some of the photos, I think I held on to big hair just a little longer than I should have.” — Brenda Foster

“I can’t say I regret any of my past looks/styles, as that’s all a part of growing up, right? But, I did have a few memorable hairstyles over the years and I remember one particular orange sweater…” — Rhea Jones

“I have to say that my look has not changed that much, except for a few more wrinkles. My hair style has stayed the same through life.” — A Gilley

What are you most looking forward to in Vanguard’s next 30 years?

“I’m looking forward to seeing how Vanguard finds new ways to be creative and continue to be people-first, especially with the current direction of technology allowing for less face-to-face or verbal interaction.” — Rhea Jones

“I look forward to Vanguard growing its footprint locally and internationally, while expanding the breadth of issues it works on and organizations and communities it works with. Vanguard’s person-first mantra and intelligent, creative, versatile and passionate staff are well-equipped to make social change happen everywhere.” — Ryan Parks

“All the fabulous people that will come into my life through Vanguard — employees and clients! These past 30 years have been chock-full of both and they make it so easy to come to work every day in pursuit of a better life for all of us.” — Maria Rodriguez

Check out some more photos over the years!