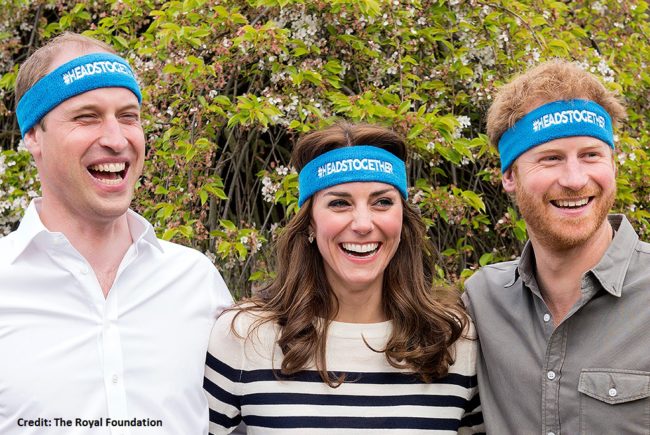 I can’t think of a better way to kick off Mental Health Month 2017 than with a little “royal treatment.” And by that I mean us, the public, being “treated” to a demonstration of bravery, dignity, and hope, compliments of Prince Harry.

The power of celebrity is undeniable and its influence profound. So when Prince Harry recently opened up about his own mental health struggles and journey of recovery, the world listened.

Yet, something in his message sounded different. Even felt different. This wasn’t your typical scripted sales pitch, product endorsement, or brand testimonial. This was one of the most well-known people in the world courageously letting down his guard, embracing his vulnerability, and putting a deeply personal aspect of his life under the global microscope.

And that makes all the difference. When a high-profile public figure like Prince Harry is invested in an issue because of his/her own experiences or those of a friend or family member, it strengthens the credibility, reach, and impact of the message. It also positions them as a more reputable and influential advocate for the issue. The message becomes personal, and therefore believable.

In some cases, that personal investment can even grow into a movement. For Prince Harry, it started as a family movement. Through their Heads Together campaign, Prince Harry and the Duke and Duchess of Cambridge have demonstrated their commitment to these issues by teaming up to change the conversation around mental health and well-being in the United Kingdom, raise awareness, and provide vital help for people with mental health challenges. Now let the national (and hopefully international) movement begin!

Through similar efforts in the United States, such as the Substance Abuse and Mental Health Services Administration’s (SAMHSA) Voice Awards program, we have seen the importance and power of personal stories firsthand. As more public figures like Prince Harry and 2016 Voice Award honorees Kristen Bell and Dax Shepard come forward to share their experiences and bring mental health issues to light, more people will feel empowered to seek treatment and support and help others do the same.

In 2016, the Voice Awards honored Kristen and Dax for talking openly about their mental health and addiction issues and affirming their commitment to share their own stories of recovery, reduce the stigma surrounding these issues, and encourage people to get help. Judging by the headlines, they certainly haven’t backed off from that commitment and are continuing to spread their message of hope and help.

“For me personally, I love talking about my issues because hiding things leads to shame and shame is no bueno. So I will continue to do so.”
—Kristen Bell, 2016 SAMHSA Special Recognition Award recipient

You and I may not have much in common with Prince Harry or Kristen and Dax, but many of us do share similar mental health and addiction challenges and are just as committed to changing the conversation about these issues and supporting those around us. And our stories of resilience and recovery are just as important and can be equally as powerful in our own families and communities. Let’s look to their honesty and bravery for inspiration as we all put our heads together for Mental Health Month.