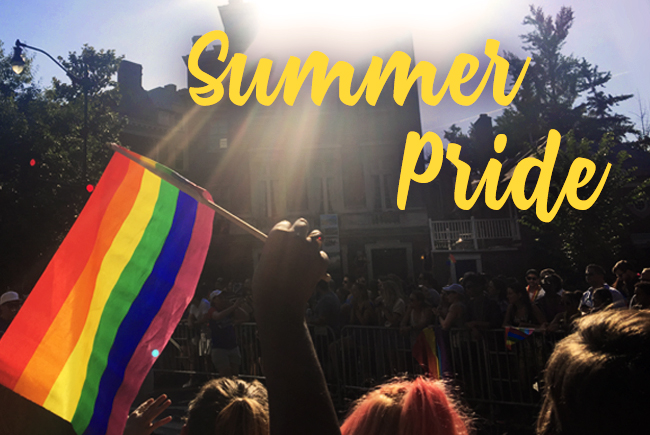 The first gay pride march I attended was in the summer of 2001 in New York City. That day remains the definitive start of many firsts in my coming out story. It was the first time I held a rainbow flag on a stick in public. It was the first time I was in the same place as a real celebrity — Cyndi Lauper, albeit she was on top of a moving vehicle singing her heart out as I dilly dallied along the far side of the sidewalk, separated from the spirited crowd on the curb. The first season of Queer as Folk (the U.S. adaptation) was ending that evening. Their parade contingent was made up of men in pink passing out pink handheld QAF paper fans. It felt significant with meaning at the time. Then GAPIMNY (The Gay Asian & Pacific Islander Men of NY) marched by, and it was the first time I saw other gay Asians banded together. They looked both brave and fearful. I could relate to the yin and yang of the situation; it was the year I first fell in love and first experienced heartbreak.

I was just a kid and brand-spanky new to New York. I didn’t yet have a bed of my own, nor a clear career path to the dismay of my immigrant family. I had no social network, other than the AOL chatrooms. This was before social media, before my go to vodka cranberries, and definitely before any intentions of coming out. I was just a shell. But by that year’s end, I would be forever changed — as would all of New York, and even the world. Innocence was lost, but I was stronger because of it.

Gay pride season kicks off every year in June, and much like our youth is chronicled by what grade we’re in, my journey of self-acceptance is time stamped by the context of each pride season. In 2003, I celebrated pride in Los Angeles, having come out to my VERY Korean parents. In 2008, the devastating defeat of taking down Prop 8 colored the march with righteous angry hues. In 2015, now living in DC, the marriage equality victory made for an amorous and ecstatic weekend. The following pride would be a stark contrast as it was the day after the Pulse nightclub massacre. This year, almost half a century since the first gay pride parade in 1969, it goes without saying that pride celebrations have profoundly evolved in meaning and execution.

Cue the rounds of constructive criticism and off-hand dissections on what pride was — or is — and what it shouldn’t be. This year, the DC-based group No Justice No Pride have been particularly vocal, resulting in frustrated and even angry sentiments. In the context of our societal and legal progress as well as grave setbacks for our community, why is it so easy to roll our eyes at the commercial sponsorships, ageist go-go boys and all the Jennifers, while we fight our way to the bar for another round? Admittedly, the sights, sounds and anthemic rhythms of Pride can feel mundane.

But for me, participating in gay pride still evokes the feeling I had in 2001 in New York City. I’m reminded of the moment I took in the crowd and saw someone that reminded me of myself, but instead with a generous smile and a stronger gaze. I remember in that moment, I shed the dull coating of shame and was introduced to myself for the first time. Unguarded and no longer invisible, I saw a glimpse and I liked it. I saw a glimpse and my soul stirred with strength and nascent inklings of pride.

This weekend in DC, I will be participating in Capital Pride events and the Equality March with my buddies. I will participate by being visible and adding a note to the chorus. I will do so knowing that this weekend is only the start of pride season and that this chorus will be carried out across different cities and different dates before the summer’s end. And we will be heard in exuberant harmony, bolstered by the rally cries of strangers that traveled this journey long before.

But I will especially think of those around me, quietly watching from the sidelines or perhaps lurking on social media from a small town. I will think of my brothers and sisters in other countries, suffering without a voice. I will make myself visible for all of them, sensing that maybe they need to see a glimpse of themselves, unmasked.

This weekend, I will be there for the kid that I once was. Thinking about that — yeah, it still tickles me pink with pride. ?