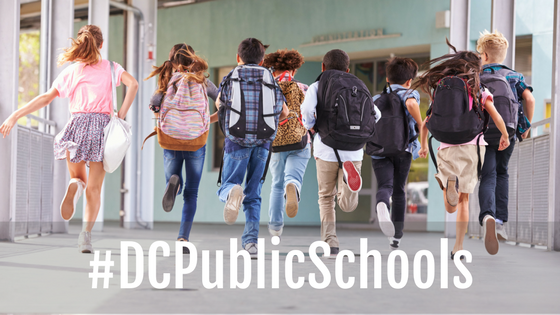 Last night’s Emmy Awards had a surprising star on social media: District of Columbia (DC) Public Schools. Onstage to present an award, comedian Dave Chappelle admitted that he had skipped rehearsal, then ad-libbed, “Now I’m going to read this teleprompter. Please forgive me. Shout-out to DC Public Schools.” (Chappelle graduated from the Duke Ellington School of the Arts, part of DC Public Schools, in 1991.)

When accepting an award later in the show, comedian John Oliver quipped, “Like Dave Chappelle, I would like to unexpectedly thank DC Public Schools because I think it would be great if it started trending on Twitter for no reason tonight whatsoever. So, if you’re tweeting about the Emmys at home, please use the hashtag DC Public Schools.” The result? #DCPublicSchools trended second only to #Emmys.

DC Public Schools was quick to acknowledge the attention:

So, what can other organizations learn from how DC Public Schools handled this unlikely turn of events?

Always have social media coverage. DC Public Schools’ social media person may not have been watching the Emmys, but responded quickly. It’s one thing not to be watching the show, and another to be in a different time zone and not able to respond when your phone and feed are blowing up with mentions. Have someone manage your social media accounts all the time, even when it seems to be a slow time for your issue or topic—DC Public Schools likely didn’t expect a Sunday night awards event to bring so much attention their way!

Be ready. DC Public Schools quickly posted a cute picture of one of their students in response to the mentions, so they must have already had available photos—along with permission to use them. Does your organization have a similar plan for responding to social media coverage? Or is there a bureaucratic labyrinth to get those 140 characters approved and shared?

Be quick. DC Public Schools responded almost immediately to their good fortune. If your social media lead is at a conference or in meetings, ensure someone else is following trends and knows how to respond quickly and appropriately. Have a plan B to respond to important topic trends. (And make sure other staff members have account access and passwords to post messages when needed.)

Be visual. A picture is worth a thousand words, and including one will make your post more engaging and more likely to be shared than a post without visuals.

Be authentic. DC Public Schools shared an adorable photo of one of their students in a classroom. The student’s mom even tweeted how proud she was to see her daughter in the photo.

Be clever. The caveat here is to make sure it’s the right time and place. Serious issues must be handled with care. This situation presented a good opportunity for DC Public Schools to be humble and funny. Their tweet received more than 3,200 retweets and 8,300 hearts as of the posting of this article. (And the numbers are still increasing!)

Connect it. The Kennedy Center even joined the fun this morning, giving a shout-out to DC Public Schools on their own Twitter account. Even if your organization isn’t the focus, can you make a connection to the one in the spotlight?

Adding to the symphony of shout-outs: we love you, @dcpublicschools! https://t.co/dEiWsmfMnr

Work it! DC Public Schools capitalized on this opportunity by including #Emmys in their post so the Emmys audience could learn more about the district, even sharing a link to their strategic plan.

Hello, #Emmys friends! We're a district on the rise, and we're happy you're here. Learn more about us: https://t.co/k94AViHVYn pic.twitter.com/UPVIj7LW6I

In addition to her work as a vice president at Vanguard Communications, Jane Tobler is also the proud parent of a DC Public Schools student!