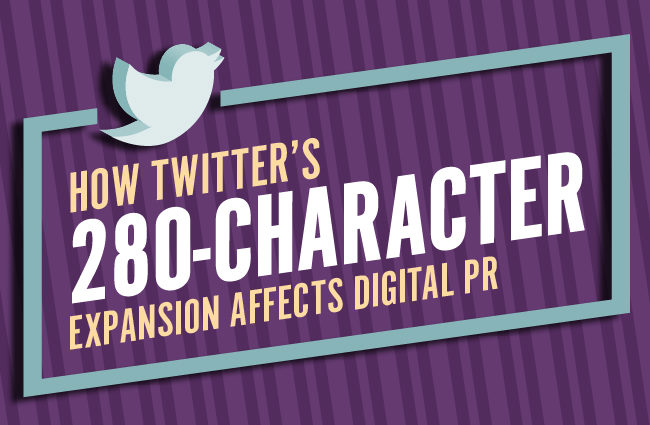 If you are an active Twitter user, you’ve probably heard the latest news that Twitter is now expanding their signature 140-character limit to 280 characters. This is a pivotal moment for Twitter, as some believe that the niche social media platform has plateaued in growth recently, despite multiple enhancements to its user interface (UI) and user experience (UX). For media, journalists and influencers/celebrities, Twitter remains a mainstay for real-time news and trending topics. Given how 140 characters has changed the PR game over the last few years, we have to wonder — what will 280 characters do for the platform?

Our Integrated Media Team has come up with a list that is part prediction and part strategy for PR practitioners to consider as Twitter rolls out this new feature. Plus, to get in the new swing of things, each of these is 280 characters or less.

BEYOND THE HEADLINE: Journalists and media outlets can now expand on the facts of a story in a more compelling and expressive manner so that they can convey not only the headline and lead of a story, but the detailed emotions, convictions and sentiments that come along with it.

NO EXCUSE: With crisis communications, Twitter audiences expect real-time, rapid responses. However, many avoided it as 140 characters prevents well-articulated, responsible updates. Now, those avoiding Twitter should consider it when developing their rapid response protocols.

DIVERSITY: Some languages (Japanese, Korean) can describe complex scenarios in 140 characters, while other languages (Spanish, English) have made this task much more difficult. The 280-character update will help communicators convey key messages using different languages.

ATTENTION SPAN: Audiences may be less likely to read messages that are shared through multiple tweets. The extended character limit could put more pressure on users to be more articulate and share their messages in one concise tweet.

TUNING YOUR VOICE: A hallmark and necessity of Twitter was snappy messages. Now brands may change their tone and lengthen messages to develop more of a voice. Brands may also further distinguish Facebook posts from tweets, as they will have more leeway to draft longer messages.

LESS MAY STILL BE MORE: It’s important for users, both individuals and organizations, to recognize that more is not always better. If they can get a message across in fewer characters, they should strive to do so. Twitter may now offer a choice, but it’s ours to use judiciously.