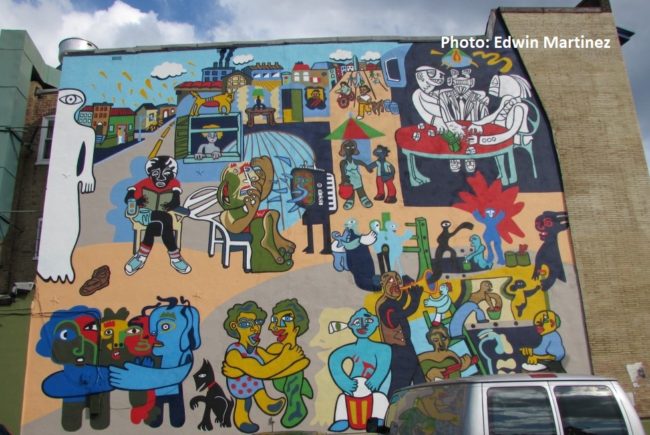 One of Washington, D.C.’s oldest murals has been protected by community activists for decades. Why is this mural so loved?

In the 1970s, Latino artists covered the Adams Morgan area of Washington, D.C., with vibrant murals that conveyed stories from the immigrant community. Many newcomers had settled in the neighborhood after leaving political unrest in Latin America.

In 1977, Centro de Arte, a Latino arts association, organized local artists and volunteers to paint “Un pueblo sin murales es un pueblo desmuralizado” (“A People without Murals is a Demuralized People”). The title expresses how public art can unify a community, tell their stories and claim their space in a new environment.

Through the mural, neighborhood artists shared their experiences as immigrants in the nation’s capital. The mural depicts the joy in the community — a band playing instruments, couples dancing in the street, children riding bikes — as well as possible threats, using imagery of businessmen playing monopoly and a looming cyclops that some interpret as the watchful eye of the government. These images celebrating culture and acknowledging struggle have continued to resonate over the years as real estate development and gentrification have changed the neighborhood.

New construction replaced almost all of the original murals, but nonprofits and community activists have held fast on “Un pueblo sin murales.”  Activists raised money to restore the mural in 2004 and organized preservation efforts again after an earthquake in 2011 cracked its wall. In 2014, artist Juan Pineda was commissioned to completely restore the painting.

“The mural is made up of messages depicting struggle. It’s important artistically, but culturally and historically as well,” Pineda said. According to a plaque by the painting, it is the last mural of its kind, “dedicated to those who struggled to make — and keep — this neighborhood their home.”

From September 15 to October 15 every year, Hispanic Heritage Month is an opportunity to celebrate the histories and contributions of Latino artists, communicators, activists and others. If you’re in the D.C. area, stop by 1817 Adams Mill Road, NW, to see a compelling visual tribute to a community and the people who have called it home.