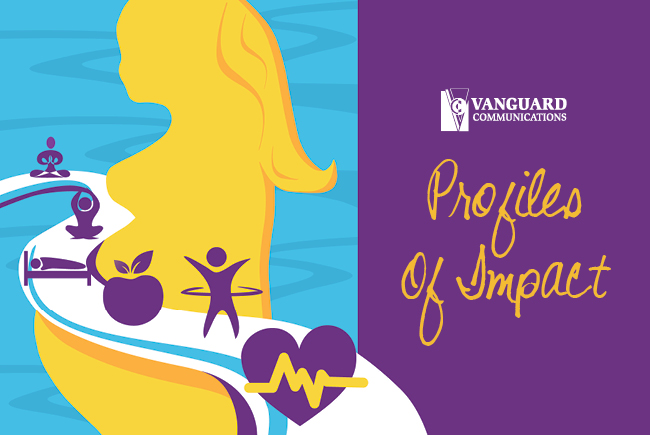 “It’s never too early to give your baby a Healthy Start.” Such was the motto of a federal campaign designed to reduce the national infant mortality rate. Established in 1991, the Healthy Start Program — within the Health Resources and Services Administration’s Maternal and Child Health Bureau — seeks to improve the health of America’s mothers and children before, during and after pregnancy by reducing infant mortality rates, increasing access to early prenatal care and removing barriers to health care access.

In conducting outreach to mothers in diverse communities as part of the Healthy Start campaign, Vanguard employed one of our most important social marketing tenets: nothing about us, without us. We worked with Healthy Start to create population-specific task forces to define themes and strategies that would resonate with multicultural communities. Based on these concepts, we developed campaign messages and materials tailored for African American, Hispanic, Native American and Asian American audiences. We also provided communities across the country with technical assistance to help them implement community-based public education and communications strategies.

In the end, the effort reached women at high risk for having complicated births throughout the country, from African American women in inner-city Baltimore to Asian women in Boston who read and spoke only Chinese or Khmer. In close partnership with a Healthy Start grantee site, we also implemented a public education campaign tailored exclusively for families within the Northern Plains Native American tribal communities.

The Healthy Start Program celebrated its 25th anniversary earlier this year. Vanguard President Maria Rodriguez, who led our work on the campaign, caught up with Deborah Frazier, CEO of the National Healthy Start Association and a former project director of the New Orleans Healthy Start program, to check in on the program’s work today.

Our infant mortality rate was embarrassingly high; the U.S. ranked 22nd among industrialized countries for infant deaths. Some 40,000 infants died every year before reaching their first birthday and another 400,000 developed chronic or disabling conditions. Alarming rates of women weren’t seeking prenatal care until after their first trimester and were smoking, misusing drugs and drinking alcohol during their pregnancies. A White House Task Force, established by President George H. Bush to research and address the situation, called for a national state of urgency on infant mortality. The Healthy Start Program grew out of the recommendations made by the Task Force as a large-scale demonstration program in communities with the highest rates of infant deaths.

The most rewarding outgrowth of the program is seeing communities involved in charting the best course for their overall health and well-being. The Healthy Start program is one of the first programs that went into communities and asked them what they needed. Since then, health care delivery systems have become more responsive to the needs of marginalized populations. I think health professionals now operate more as partners with the people they serve.

At the same time, we have expanded our work with fathers and other men. Early Healthy Start programs reported that addressing infant mortality required more than working with moms; dads had to be involved as well. Some of Vanguard’s early work was designed for fathers and today, we have active Fatherhood programs in most of our Healthy Start programs. The Association has developed a two-day community training called Lifecourse Approach to Fatherhood, created a texting program for dads and hosts a national two-day Summit on Fatherhood and Health and Wellness of Fathers.

For some time now, we have been seeing lower infant death rates in communities with Healthy Start programs. In 2014 for example, communities with Healthy Start programs averaged an infant mortality rate of 4.3 while the U.S. national rate was almost 6 percent when last measured in 2013. We’re seeing lots of other improvements as well. More women are seeking early prenatal care, fewer babies are born with low birthweights and there are fewer pre-term deliveries.

I think the biggest difference today is that we are focusing more on the social determinants of health. We are working in partnership with communities to support pregnant women who are living under conditions of chronic stress and depression because of living in poverty and worrying about violence in their communities. These issues were there in 1991, but the system wasn’t acknowledging them as critical factors in improving health outcomes of women and their families.

Since the program’s creation in 1991, Healthy Start has grown from a grassroots project in just 15 communities to establishing 100 locations in 37 states and Washington, DC, as of 2016. Healthy Start continues to focus on reducing infant mortality and addressing health inequities across the country.