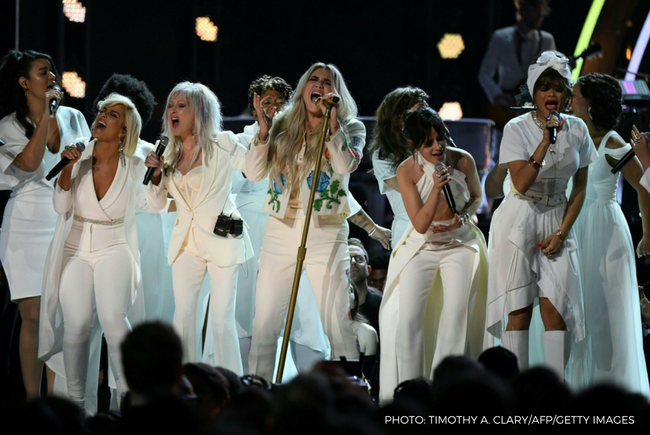 In an interview with Variety following the Grammys on Sunday, Recording Academy president Neil Portnow had this to say about the lack of women nominated for awards in 2018:

“It has to begin with … women who have the creativity in their hearts and souls, who want to be musicians, who want to be engineers, producers, and want to be part of the industry on the executive level… [They need] to step up because I think they would be welcome. I don’t have personal experience of those kinds of brick walls that you face but I think it’s upon us — us as an industry — to make the welcome mat very obvious, breeding opportunities for all people who want to be creative and paying it forward and creating that next generation of artists.”

Grammy award winner P!nk responded on Twitter to Portnow’s comments with this note:

“Women in music don’t need to ‘step up’ – they’ve been stepping up since the beginning of time. Stepping up, and also stepping aside, women OWNED music this year. They’ve been KILLING IT. And, every year before this. When we celebrate and honor the talent and accomplishments of women, and how much women STEP UP every year, against all odds, we show the next generation of women and girls and boys and men what it means to be equal and what it looks like to be fair.”

In light of the growing Time’s Up movement and support at the Grammys itself for the #MeToo movement, Portnow’s comments ring as tone deaf. P!nk and other female musicians are reacting to the lack of understanding in his statements for the bias, obstacles and systems that challenge women to advance in the music industry.

Could this controversy for the Recording Academy have been avoided? Absolutely. With some forecasting and preparation, organizational leaders can sidestep costly message blunders like this one and address these issues directly and with context. They simply need to:

Tone deafness can be difficult to recover from. Be sure you take the temperature of an issue before you discuss it with broad audiences.