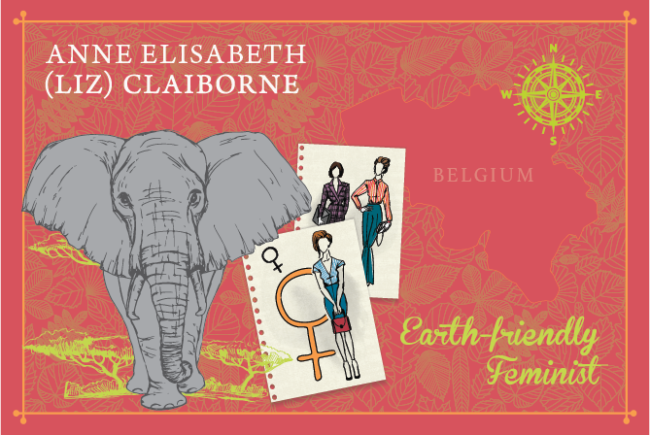 “It was a feeling of responsibility… when you have women depending on you.” – Anne Elisabeth (Liz) Claiborne

In today’s progressive environment, women in leadership roles — including in business — isn’t out of the norm. Three decades ago, however, it was ground-breaking. Such is the legacy of Belgium-born Anne Elisabeth (Liz) Claiborne.

This business and fashion pioneer turned environmental activist got her start by winning a design contest held by Harper’s Bazaar magazine at age 19. Shortly after, Claiborne moved to New York City to start a job as a sketch artist, working her way up to lead designer by the time she was 31.

After stints in several design houses, she co-founded Liz Claiborne, Inc. in 1976 and served as the lead designer for more than 20 years with the understanding that “women are better judges of what women want to wear to work.” She designed modern, comfortable and affordable pieces that could be styled in many ways and offered an alternative to fussy designs that used bows and frills.

Her fashion empire revolutionized women’s apparel in the United States, giving it a fresh, innovative perspective. This positioned her as an inspiration and role model for women entering the workforce in the 1980s, proving it was possible to break through the glass ceiling in a highly competitive industry.

The feminist designer not only brought about social change in style expectations and gender roles, but in the environment as well. After retiring from her career in fashion, she and her husband Arthur Ortenberg devoted their time to environmental conservancy projects around the world, advocating for an increase in wildlife protection.

They started the Liz Claiborne and Art Ortenberg Foundation in 1987 for environmental conservation that expanded into Tibet, Myanmar, Madagascar and Romania, as well as established environment education programs in Brazil and Kenya to build awareness and influence others to take action.

Although her brand may have faded in recent years, Claiborne’s legacy lives on through her game-changing take on feminism in the workplace. Her foundation’s conservation efforts continue to bring attention to the need of communication and persuasion in the efforts to preserve wildlife and diminishing natural resources.