“Parents don’t make mistakes because they don’t care, but because they care so deeply.” — Dr. T. Berry Brazelton

In our 31 years as a firm, there have been many champions of change who have touched our hearts. When one of these bright lights passes, it is only natural for us to reflect on the impact they had on the people they served and loved.

This week, pediatrician and pioneer in research, Dr. T. Berry Brazelton passed away at the age of 99.

As described by The Washington Post, “Dr. Brazelton was perhaps the best-known American pediatrician since Benjamin Spock, who revolutionized child-rearing by counseling parents to rely on their ‘own common sense’ rather than on commandments dispensed by purported experts.”

Here are some reflections on our time with Dr. Brazelton during National Children’s Mental Health Awareness Day:

“With all of the attention and demands of him, Dr. Brazelton was still so generous with his time and advice. I don’t have any pictures from the day we met, but I always will clearly remember the valuable personal counsel he gave me about the impact of trauma and neglect on babies. It created an important and effective roadmap for our parenting journey.” – Brenda Foster

“You never would have guessed that Dr. Brazelton was in his 90s. His positive energy and enthusiasm was contagious. When you spoke with him, he held your gaze with a smile and you felt he was listening to you. After meeting him, you understood why he was such a good pediatrician and able to really help parents become better parents and create healthier, more supportive environments in which children could grow and thrive.” – Crystal Borde

“Our guest of honor was going to be Dr. T. Berry Brazelton – someone whose book offered the virtual pats on the back and “there-there’s” that I, as a new mom, had needed years ago. How could we properly honor such a beacon? What did I need to know about the esteemed pediatrician? At the Dr. Brazelton’s talk about how important the sense of touch and connection is to even very new infants left us all teary-eyed.

And, later, at a reception to honor him, he took photo after photo with admirers, his beaming smile never fading and his energy never flagging. He taught so many new mothers how to raise healthy infants, but that day, he also taught me how to age gracefully. Rest in peace, Dr. Brazelton.” – Helen Mitternight (former Vanguard employee)

“Working with Dr. T. Berry Brazelton for Children’s Mental Health Awareness Day was a true honor and I was so moved by his presentation that I wanted to personally thank him afterwards — but he was mobbed with well-wishers. When I was finally able to slip in to express my appreciation for his work and words, he talked to me about my experiences as a mom as if he had all the time in the world. I walked on air all the way home.” – Jane Tobler

“Kind, caring and incredibly charismatic and such a privilege to simply meet the man. He charmed both me and my daughter and reminded us of our evident love and respect for one another … evidenced in our countenance … suggesting it would support us and make us stronger into the future. And he gave great hugs to us both.” – Leah Holmes-Bonilla (former Vanguard employee)

“I had the privilege of being Dr. Brazelton’s liaison for Awareness Day 2010. Talk about star power. Participants were falling over themselves to shake his hand and tell him what his work had meant to them. Some people cried. Everyone wanted a picture with him. I have never seen such a reaction to an “academic” in my life. It was a delight to see him celebrated in such a way. The picture of the two of us  – or three! — was framed in my daughter’s nursery for years.” – LeAnne DeFrancesco 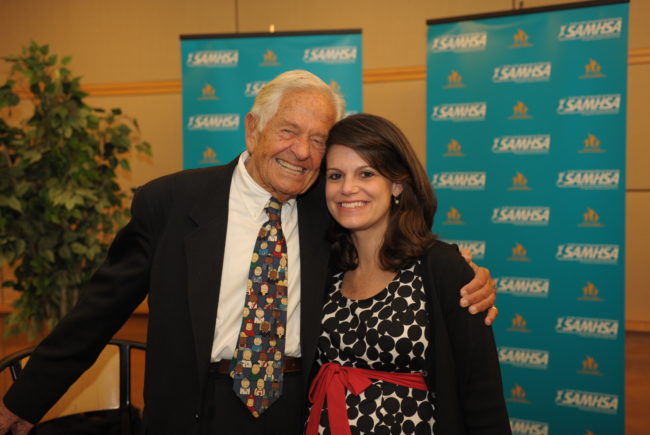 “In the last 30 plus years of practicing public relations, I’ve had the opportunity to work with many high-profile individuals. Many have been generous and kind with their time and their words. And many have been fawned over by everyone around them. Dr. T. Berry Brazelton was no exception, but there was something different about him. I think it was his genuine interest in people. He made you feel like a celebrity when you were around him. I am grateful to have met him and for all he taught me in such a short time about the importance of always being kind. Rest in peace, Dr. Brazelton.” – Maria Rodriguez

“As Dr. Brazelton had served as the honorary chairperson for the 2010 Awareness Day Event and we were preparing to celebrate the event’s 10-year anniversary, I reached out to see if he might be able to record a brief message or provide a statement about the importance of children’s mental health. At the ripe age of 94, Dr. Brazelton was kind enough to record an audio message [to be played at the event] about the need to support the mental health needs of children, youth or young adults.” – Scott Rieder