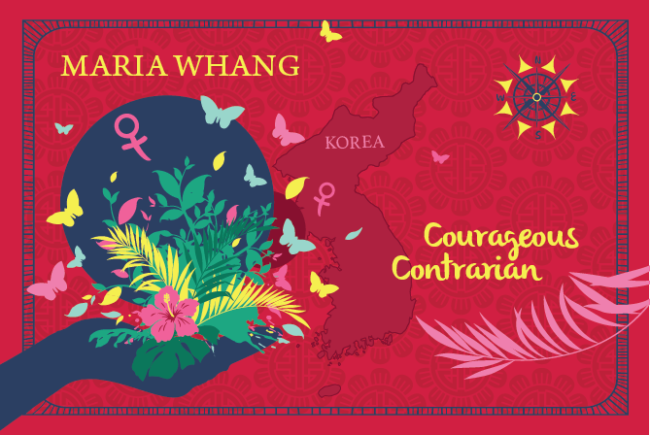 “We came [to America] because we felt we could do anything and be anything here.” – Young Ok Kang, son of Maria Whang

At the turn of the 20th century, it was not common for women in traditional Korean culture to have a voice, enact change or participate in society as men did. Women could not even sit with their sons in temple.

It was against this backdrop that Maria Whang not only found her own voice, but made the decision to help others do so as well.

By the late 19th century, schools were being established for women in Korea. With education came enlightenment and over time, more rights. Whang was determined to create a more equitable life for herself, even if that meant leaving home.

Born in what is now Pyongyang, North Korea, Whang’s role in society as a wife was unfulfilling and limited to household duties. She dreamed of changing society’s expectations of women and embracing her creativity, yet knew that such aspirations were unattainable in her environment, where gender discrimination was the norm.

Around 1901, thousands of Koreans were immigrating to Hawaii in search of a new life. After years in an unhappy marriage, Whang and her children joined this movement in 1905 with the help of her church, leaving her wealthy husband and his concubines behind.

Once in America, Whang used the power of knowledge to inspire change and create opportunities. She encouraged her children to seek higher education and be involved in their communities, and she modeled these values. When she wasn’t earning a living in a sugar plantation field, she taught the Korean language and Bible studies to children at the plantation.

In addition to being an educator, Whang was a community organizer who championed women’s rights by founding the Korean Women’s Association Hawaii chapter in 1913. Her tenacity in pursuing a society in which women are valued and respected remains an inspiration to women today.