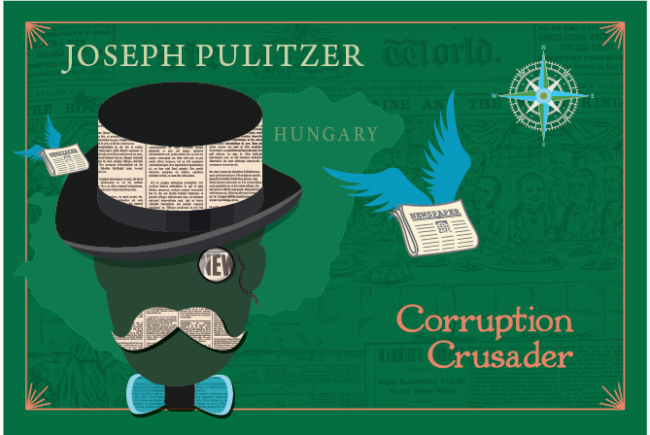 In 1864, long before he waged courageous crusades against corrupt practices in government and business, Hungarian-born Joseph Pulitzer arrived in Boston at the age of 17, recruited as a solider for the American Civil War.

Once the war ended, Pulitzer moved to St. Louis, Missouri, where he worked odd jobs while studying English and the law. It was there that he met two attorneys who also were editors of St. Louis’s Westliche Post. They hired Pulitzer as a reporter in 1868, the start of his career as a journalism visionary dedicated to social justice. Ten years later, Pulitzer founded the St. Louis Post-Dispatch, which thrived under his leadership and remains the only daily printed newspaper in St. Louis to this day.

Pulitzer dedicated himself to his work as a journalist, appealing to the public through investigative articles and editorials that condemned government dishonesty and wealthy tax-dodgers. His journalistic crusades were largely responsible for the passing of antitrust legislation and the regulation of the insurance industry. An embodiment of American journalism, this skillful and passionate publisher and editor’s innovative ideas undeniably reshaped how news was shared with citizens in the U.S.

His efforts to uncover unjust activity and change the public’s perspective on politics weren’t confined to St. Louis. In 1883, Pulitzer purchased The New York World and focused on stories involving human interest, crime and corporate scandal, including exposés of corrupt tenement management and undercover reporting on the conditions in mental health units. With Pulitzer as its publisher, The World reigned as the largest circulating newspaper in the country at the time.

Pulitzer also used politics to inform citizens and promote social change. After serving in the Missouri state legislature, he was elected to the U.S. House of Representatives from New York as a Democrat in 1884 but resigned before his term was up due to his competing journalistic duties.

In 1912, a year after his death, Columbia University founded its Graduate School of Journalism using money Pulitzer left to the school in his will, fulfilling his wish of being able to educate journalists at the university level. Five years later, the university awarded the first Pulitzer Prizes in journalism. Today, these prestigious awards honor achievements in literature, poetry, history, music and drama as well.

More Pulitzers have been awarded for journalism that has exposed corruption than in any other category – a fitting tribute to Pulitzer’s use of communication for the pursuit of justice.