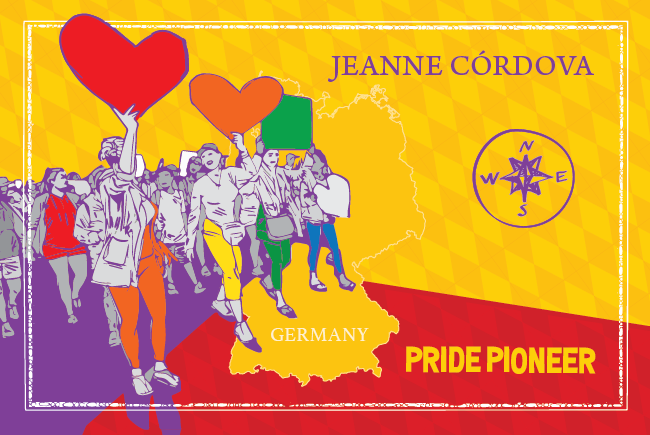 “It’s the job of young people to push the societal envelope.” – Jeanne Córdova

Whether a nun protesting the Vietnam War or a pioneer of the lesbian feminist movement, German-born Jeanne Córdova’s roles as an activist, author and publisher had one thing in common: her dedication to social justice reform.

After immigrating to Southern California with her family, Córdova joined the Immaculate Heart of Mary in 1966, an order of nuns who supported the progressive changes of Vatican II, but she left the convent soon after to pursue a career as a community organizer.

She went on to earn her master’s degree in social work from the University of California, Los Angeles, and found herself at the forefront of defending gay and lesbian rights, becoming a key organizer of several national lesbian conferences.

As president of the Los Angeles chapter of the Daughters of Bilitis, a lesbian civil and political rights organization, Córdova published the Lesbian Tide (1971 – 1980), the first national newspaper for lesbians. As the human rights editor of the Los Angeles Free Press, Córdova wrote articles that amplified underrepresented voices.

After leading a statewide campaign in California to elect dozens of openly gay delegates to the 1980 Democratic National Convention, Córdova founded the Community Yellow Pages, Southern California’s gay and lesbian business directory, which helped bring members of the community out of the shadows.

In 1999, Córdova moved to Mexico with her life partner, Lynn Harris Ballen, to get in touch with her Latina heritage and write her third book, When We Were Outlaws: A Memoir of Love & Revolution (2011).

Córdova’s dedication to creating social change through communication stretched across four decades and inspired a new generation of women not to shy away from adversity. A social justice visionary, Córdova created a legacy that lives on through her extensive writing and the decades she spent fighting for lesbian visibility.