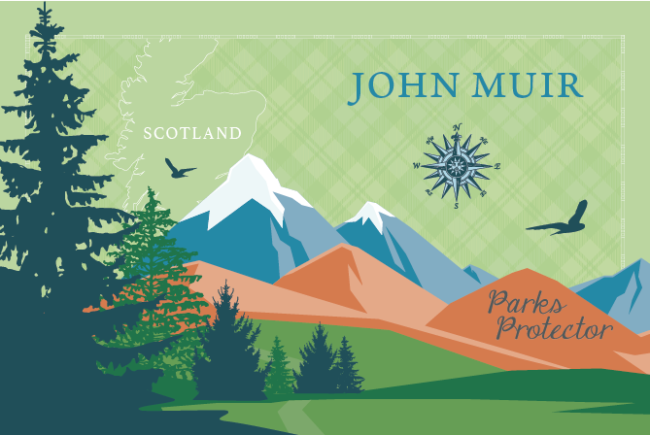 “The power of imagination makes us infinite.” – John Muir

From a young age, John Muir had a fascination with nature that guided his life. In 1849, Muir’s family emigrated to Wisconsin from Scotland, where his infatuation with the countryside began. His love of the wilderness grew as he got older, eventually leading him to leave college so he could travel throughout the northern United States and Canada.

Muir found a turning point in his life after being nearly blinded in an accident in 1867. He resolved to see as much of the country as possible by walking 1,000 miles from Indianapolis to the Gulf of Mexico.

Once Muir arrived at the Gulf of Mexico, he sailed to Cuba and Panama, before eventually landing in San Francisco a year later. California became his home and where he began his career as a writer and activist.

Muir’s books, articles and essays describing his adventures and naturalist philosophy attracted millions of readers and highlighted the importance of protecting the wilderness in the U.S. His passionate writing motivated people to act in support of natural spaces, leading to the preservation of the Yosemite Valley and Sequoia National Park.

In 1890, due in large part to Muir’s efforts, an act of Congress created Yosemite National Park. Muir often is referred to as the father of our national park system, and his advocacy led to several other national parks being founded, including Grand Canyon National Park.

Muir’s impact on our environment didn’t stop there. He founded the Sierra Club in 1892 to support the conservation of the Sierra Nevada. Today, the Sierra Club is the nation’s largest grassroots environmental organization. In 1903, Muir’s writing attracted the attention of President Theodore Roosevelt, which led the president to sign off on the creation of conservation programs, national parks, national forests and wildlife sanctuaries across the country.

Muir masterfully used communication as a tool to convey his passion for the environment and nature, leading to an evolution of our nation’s perspective on the importance of not only experiencing nature, but caring for it as well. An inspiration to future generations of environmental activists, Muir left a lasting impact on the preservation of America’s land — an impact that is reflected in all the places he touched, from the Muir Woods National Monument in California to the Muir Glacier in Alaska.