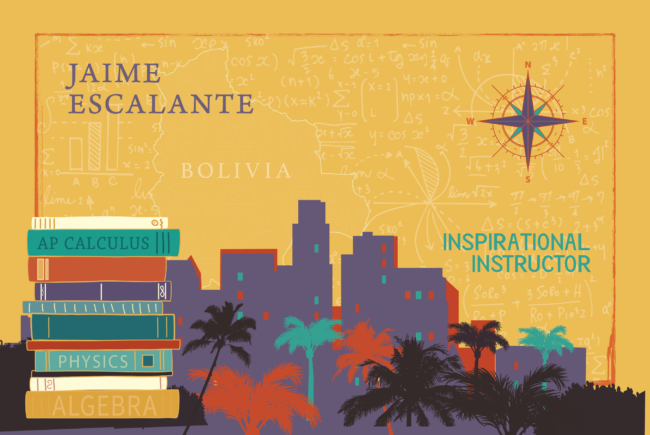 To be successful, you need ganas — the Spanish word for desire and drive. Bolivian-born teacher Jaime Escalante lived by these words, and throughout his years as an educator taught his students to apply this way of thinking to their goals as well.

The son of two teachers, Escalante understood the importance of an education. He left Bolivia in the 1960s to pursue a better life in the U.S. Although he was already an educator in his country, immigrating to America meant working several odd jobs, teaching himself English and earning another degree before he was able to continue his career.

In 1974, he took a job at Garfield High School teaching math to students in one of the most notoriously dangerous neighborhoods in Los Angeles. His students were labeled by others as disadvantaged and unteachable due to their lack of motivation, but that did not deter Escalante. He believed that through effective communication, a teacher could open a student’s world to possibility and provide the encouragement they needed to reach their full potential and overcome adversity.

Instead of traditional lecturing, Escalante’s approach involved engaging his students by balancing confidence and criticism. He spoke to them at their own level — often through incorporating music and sports references into class, and even occasional good-natured teasing.

Challenging his students to exceed the expectations society had set for them, Escalante created an advanced mathematics program with a rigorous curriculum. In 1982, all of his math students passed the AP (advanced placement) calculus test, an achievement that was unheard of and considered impossible by the testing board. When their excellent scores raised suspicion, they were accused of cheating and asked to retake the exam. They passed again.

Escalante’s extraordinary success as an inspirational teacher quickly earned him national attention. He received the Presidential Medal for Excellence and was inducted into the National Teachers Hall of Fame. His story became the subject of the 1988 film Stand and Deliver.

Escalante led hundreds of students to excel not only in math, but in college and their careers before his retirement in 1998. Today, his ganas and unorthodox methods of teaching serve as an inspiration to both educators and students across the nation.