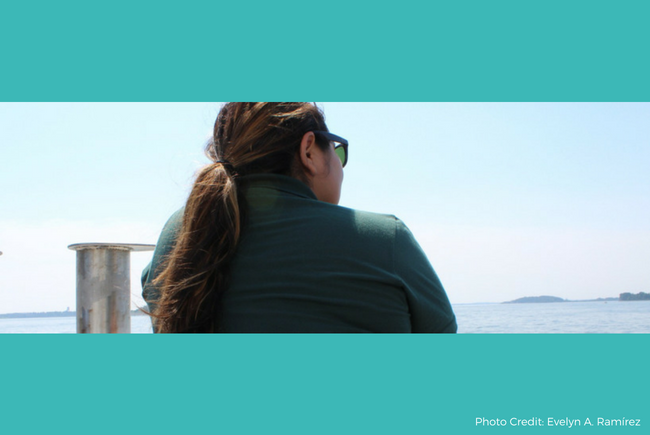 By Evelyn A. Ramírez

This post was originally shared on Evelyn A. Ramírez’s personal blog. Evelyn was a 2017 member of Comunicadores for the Future, a program from Vanguard Communications and the Cisneros Hispanic Leadership Institute at the George Washington University.

Last summer, I was chosen to participate in the Comunicadores for the Future fellowship. For those that might not know about this fellowship, it was created in 2017 Maria Rodriguez and her team at Vanguard Communications and the Cisneros Hispanic Leadership Institute at the George Washington University.

Under Comunicadores, I worked with the Girl Scouts Nation’s Capital in their public relations department. I never expected to fall in love with the work I was about to take on. At Girls Scouts, I was given the opportunity to create real videos focused on the impact Latinas make within the Girl Scouts Nation’s Capital. The Council was making a huge push to reach out to Latinas and provide resources in Spanish to make Girl Scouts more inclusive–I got to be an integral part of this effort. I worked on such meaningful and intentional work, I decided to continue my involvement after my summer assignment was done for a part-time job thanks to the help of grant provided by Crimsonbridge. When I was a younger girl, I wanted to become a Girl Scout but my native language being Spanish and not having many Latinas were a setback to my involvement in the Council I lived in. Who knew that fifteen years later, I would be helping others overcome those barriers that prevent their involvement?

This summer I took another opportunity where I get to employ many of the skills I was able to develop last summer at Girls Scouts such as storytelling through digital media, creating videos, graphics, and more.  At the Latino Heritage Internship Program I am supporting seven amazing youth make connections with the National Parks of Boston. The pilot program Historias de Boston is now midway through the six-week timeline and we have created an important number of connections between the themes of community and leadership within the National Parks of Boston and the Latinx community in Boston.

I am also teaching the youth participating in Historias de Boston skills needed to produce digital oral histories. Isn’t that amazing? The connections between the continuous fight for housing rights for underserved communities. Through this project we are able to empower the next Latinx youth generation by not only creating a seat at the table for the Latinx community, but also acknowledging the history that Latinx communities have in Boston.

Maria Rodriguez and her team at Vanguard taught me how to tell stories that most effectively get their message across. I still remember that first skills-training session with on Personal Storytelling. Not only I aim to implement the lessons learned then, but I am paying it forward. Who knew that I would be sharing what I learned to other youth? I am loving working with each of these youth on developing their own personal storytelling.

I know that the news continues to portray a dismal outlook in social issues, politics, and more but looking at the youth and their ambitions, we are going to be alright. As for me, this is only the beginning, I will continue to empower our youth and make sure that the Latinx community is acknowledged in intentional spaces. I already know where I will be next as I participate in my Young People For fellowship, focusing on food insecurity within the DMV area. As I also mentioned to our Historias de Boston youth, I will continue to fight against the Latina wage gap that exists nationwide at fifty-four cents for every white man’s dollar.

To Vanguard and the Cisneros Institute, thank you for giving me so many opportunities to grow, each of them helping me imagine, shape, and better prepare me for whatever my career path is. Thank you for investing in me and for continuing to support me along the way.

To Hispanic Access Foundation and the National Parks of Boston, it is an honor thus far to be part of such an astounding program that provides multiple resources by continuous hosting webinars, visit our sites, and reach out to make sure we succeed.