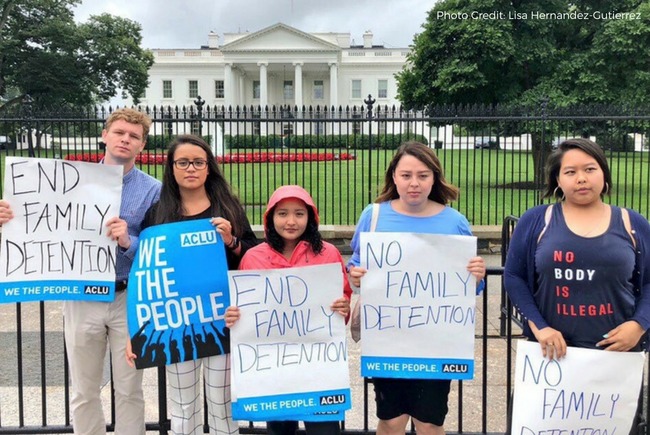 For the second year, Vanguard has partnered with the Cisneros Hispanic Leadership Institute to fund Comunicadores for the Future, a paid internship program that supports the next generation of Latinx communicators. Lisa Hernandez-Gutierrez is the one of the program’s 2018 interns.

If you ask me who I am, I might give you a few answers. I am a first-generation George Washington University student. I’m a Salvadoran immigrant. I’m a queer Latina. I may put those in a different order each time you ask me the question, but all of them are layers of me.

This summer, I interned at the American Civil Liberties Union (ACLU), a nonprofit, nonpartisan legal and advocacy organization whose mission is to “defend and preserve the individual rights and liberties guaranteed to every person in this country by the Constitution and laws of the United States.” Working as a political communications intern at the ACLU’s legislative office, I learned that being successful in communications also has layers.

I have been challenged to react quickly to breaking news, write strategically and be well versed on different issues. The summer’s hot-button topic, family separation, presented me with a more nuanced challenge in my internship: It hit very close to home.

My family and I immigrated to the United States nine years ago, and if fate had taken a different turn, my brothers and I could have been separated from our parents. The thought of being separated from both my siblings and parents is unfathomable. Family has grounded all of us as we have rebuilt a life for ourselves in a new country. The mantra “don’t bring your personal problems to work” seemed almost to mock me as I grappled with distancing my emotions from my assignments.

I could not escape my identity, could not shrug off my identification with “immigrant” and “Salvadoran” like a coat at the front door. I coped by distancing myself from the issue for the sake of completing work, but resorted to calling my mom every afternoon at 5:30 on the dot, yearning to feel close to home. The fight against the Zero Tolerance policy felt more futile with every breaking story about the inhumane conditions under which the children were detained.

On June 22, the ACLU organized an action in front of the White House, playing, on loop, the ProPublica audio clip of crying children in detention centers and inviting activists to speak. The event drew a bigger crowd than expected and brought important media coverage to what families were experiencing.

I was tasked with weaving through the crowd and getting statements from attendees, asking why they had come out on a rainy Friday afternoon to support the organization’s work. The overwhelming dedication to allyship, both from my colleagues organizing the event and those in attendance, restored in me the hope I had lost touch with among feelings of anger about the injustice immigrants face in the search for a better future. Politicians insisted the U.S. is a land of law, but what good is law without empathy for the plight of others?

Working alongside the ACLU communications team provided me with a renewed determination to create a more perfect union. Throughout my time with the team, I have completed coverage reports on family separation that have allowed me to not only stay informed, but also gauge the nation’s outrage and bear witness to fights from states, cities and communities. Working alongside the translation team while they helped in organizing a protest in the epicenter of the crisis, Brownsville, Texas, allowed me to understand the importance of carrying messages in multiple languages.

My experiences this summer have helped me to fully appreciate the intersection of communications, legislation and activism. I had a front-row seat for a national conversation where I could see how communications can truly change the world.