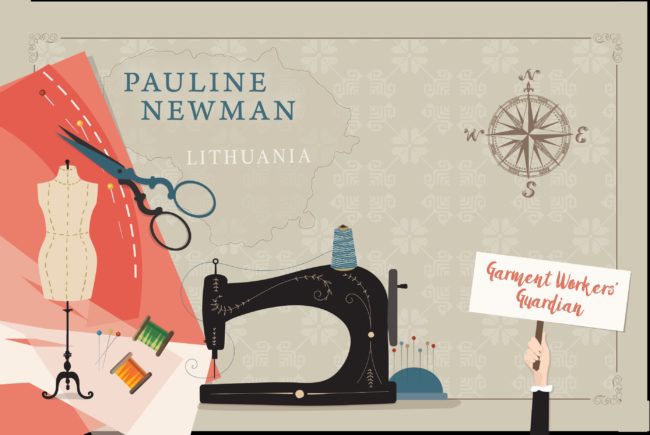 “All we knew was the bitter fact that after working 70 or 80 hours in a seven-day week, we did not earn enough to keep body and soul together.” — Pauline Newman

During her childhood in Lithuania, Pauline Newman’s career as an activist began when she had to fight to receive an education due to her family’s Jewish heritage and economic status. She was eventually granted the right to attend a boys’ religious school — her first win against gender discrimination — but her family immigrated to New York City shortly after she began school.

When she was 11, Newman began working 12-hour days at the Triangle Shirtwaist Company factory under harsh conditions. Disturbed by what laborers endured for so little pay, Newman joined the local Socialist Literary Society as a teenager after learning about socialism and trade unions through the Jewish Daily Forward newspaper. Inspired by the use of communication to illuminate important social issues, she improved her English reading and writing skills in order to document the difficulties that immigrant working women faced in America.

Newman also formed study groups with like-minded women in the Society. Organizing these informal meetings was the start of her career as a feminist labor pioneer. A few years later, at age 16, she led the largest rent strike in New York City’s history, eventually leading to the establishment of rent control.

Two years after that, more than 20,000 female New York City garment factory workers rallied to protest their poor working conditions and unfair wages. Newman played an essential role in organizing the strike, gathering and motivating crowds through her use of strategic speeches to accomplish their goals of equality and visibility for women in the union. After the strike ended, Newman was the first woman ever appointed general organizer by the International Ladies’ Garment Workers’ Union (ILGWU).

Newman worked for the ILGWU for more than 70 years as an organizer, labor journalist, health educator and liaison between the union and government officials. Alongside Eleanor Roosevelt in the 1920s and 1930s, Newman helped create new government agencies to improve working conditions for women in the labor force.

Remembered as a hero for pursuing progressive reform, Newman played an invaluable role in shaping 20th-century industrial America’s labor, tenant, socialist and working-class suffrage movements. Her legacy as a tenacious advocate for women and the working class can be seen in the improvements made over the years to factory safety standards, fair wages and the presence of women in politics.