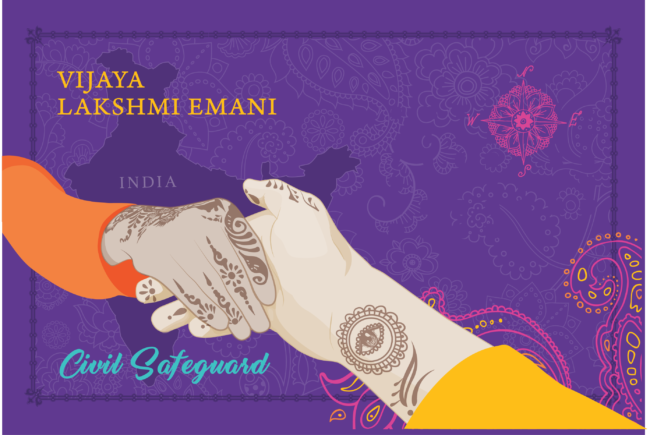 “She did the work that she was passionate for and believed that it was her duty in life to make sure that no one else struggled as she once did.” — Sujata, Vijaya Lakshmi Emani’s daughter

After graduating college in Hyderabad, India, Indian-American social activist Vijaya Lakshmi Emani moved to Ohio in 1986, bringing with her a determined attitude and courageous spirit. Her humanitarian efforts to help immigrants overcome social injustice in the United States quickly established her as a civic leader within the Indian-American community in Cleveland.

A single mother of two daughters, Emani started support groups to encourage people to speak out about domestic violence — something that was considered taboo in the Indian-American community. Although she had graduated with engineering and computer science degrees, she quickly developed additional skills as a communicator and community organizer. Armed with these skills, she could effectively use her voice to bring the issue of abusive relationships to light by bravely sharing her personal story and inspiring hope in other immigrant women in similar situations.

Emani didn’t limit her efforts to focusing on women’s empowerment; she also committed herself to community involvement, which led to the creation of Cleveland’s India Cultural Garden, as well as the installation of Mahatma Gandhi’s statue there and a visit from Gandhi’s grandson, Rajmohan Gandhi.

In her time as a board member and president of the Federation of India Community Associations of Northeast Ohio (FICA), Emani opened the discussion in Cleveland about racial violence in the U.S. and promoted peace by bringing together Cleveland’s international communities to reach out together to the broader population.

An active member of Toastmasters International, Emani was honored with their Advanced Communicator Silver award. She exemplified the organization’s belief that if people were able to communicate better, they could break down barriers to peace.

Up until the day that a traffic accident took her life, Emani devoted her life to helping others. In 2011, President Barack Obama posthumously honored Emani, a champion of peace, with the Presidential Citizens Medal for her dedication to advocating for social justice for immigrant communities and counseling domestic violence survivors.

Remembered as a community hero, Emani used her public speaking skills to overcome adversity, shining a light on important issues and encouraging others to speak out against injustices.