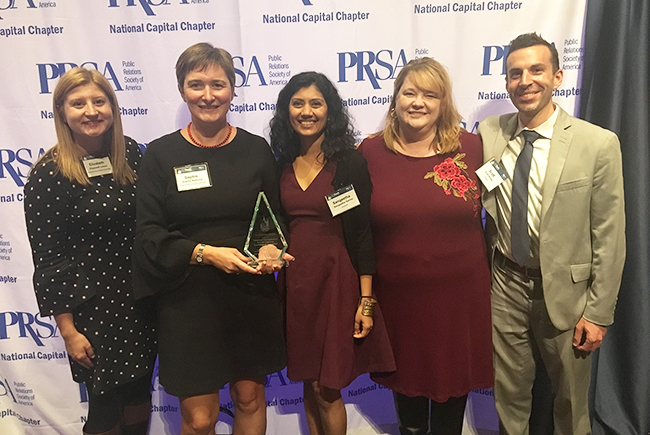 Vanguard Communications and the American Psychological Association (APA) won a Thoth award for their 2017 media relations campaign to support the APA’s annual Stress in America™ survey.

The Thoths are a prestigious award of excellence conferred by the Public Relations Society of America’s National Capital Chapter (PRSA-NCC) for exceptional and impactful strategic communications campaigns and agencies in the greater Washington, D.C., area. The award ceremony was held at the National Press Club on Oct. 18.

“We’ve been helping support the annual survey since its launch in 2007, and every year we include the latest communications strategies and tools to give the findings a wider audience than the year before,” said Maria Rodriguez, president and CEO of Vanguard Communications. “We’re excited to see APA recognized for elevating the awareness of stress and mental health and sparking a national conversation on the harmful effects of stress.”

APA conducted the annual survey for the 12th year in 2017, to track Americans’ stress levels and the issues that cause them stress. The survey underscores the connection between stress and its effect on mental and physical health. The survey also allows APA and its member psychologists to stay abreast of what is keeping Americans awake at night and provide expert guidance to help people manage their stress.

The 2017 survey found that more than half of Americans considered this the lowest point in U.S. history that they can remember. Uncertainty about health care and the future were also sources of stress for Americans. Because chronic stress can lead to negative health outcomes, the APA shared coping mechanisms for these new stressors like advising people on healthier ways to stay informed about current events without compromising their mental health. The findings and guidance were shared in more than 2,000 stories and across more than 55 million Twitter accounts.

A complete list of Thoth award winners is available here.