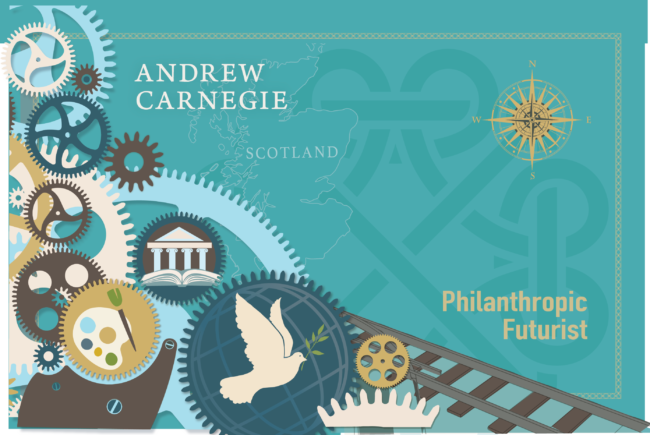 “To try to make the world in some way better than you found it is to have a noble motive in life.” – Andrew Carnegie

Scottish-born Andrew Carnegie, one of the wealthiest Americans of all time, didn’t always live a prosperous life. At age 13, due to financial hardship, his family immigrated to Pennsylvania in pursuit of a stable income. He took a job as a telegraph messenger in 1849 and was quickly promoted due to his work ethic, but this was only the start of his successful self-made career.

After Carnegie fostered connections while on the job, iron-marker and philanthropist Colonel James Anderson gave him access to his vast personal library. Realizing the importance of learning, Carnegie was inspired to read as much as possible to educate himself and cultivate his communication skills. It was Colonel Anderson’s generosity that would later motivate Carnegie to play an influential role in society as a philanthropist as well.

A few years later, Carnegie was hired by the Pennsylvania Railroad Company as a secretary and telegraph operator; by age 24, he had been promoted to superintendent. From there, Carnegie continued to use his interpersonal communication skills to learn about business management from industry professionals, as well as how to make smart investments that enabled him to accumulate capital.

Within the next decade, Carnegie was leading the expansion of the steel industry. His business, the Carnegie Steel Company, revolutionized steel production in the United States. Carnegie built plants around the country, using methods that made the manufacturing process more efficient. It didn’t hurt that he already owned what he needed: raw materials, ships and railroads, and coal to fuel furnaces. By 1889, Carnegie’s business strategy had led his company to become the largest one of its kind in the world.

Carnegie began a new chapter in his life a few years later. Throughout his career, he wrote books and articles that discussed the need for the wealthy to practice social responsibility by giving back to others. Forever grateful for the opportunities that were given to him to expand his knowledge, Carnegie wanted to give back in the same way now that he had the means to do so. To accomplish this goal, he retired and sold his business for $480 million in 1901, and he dedicated himself full time to his philanthropic endeavors.

Understanding the role communication skills play in an education — especially for immigrants — Carnegie donated about $5 million to the New York Public Library to support its expansion. He also funded the creation of more than 2,000 libraries in towns across the U.S. and established Carnegie-Mellon University, the Carnegie Foundation for the Advancement of Teaching, and the Carnegie Endowment for International Peace, as well as other schools and nonprofit organizations.

After a decade of committing himself to his philanthropy, staying true to his belief that the wealthy should live life without extravagance, Carnegie had given away 90 percent of his fortune. A champion of the working class, Carnegie shaped a legacy that lives on thanks to the millions who have benefited from his generosity, ambition and work ethic. Through his donations, he has enriched the lives of others by providing them with the opportunity to seek an education and develop their communications skills as he once did.